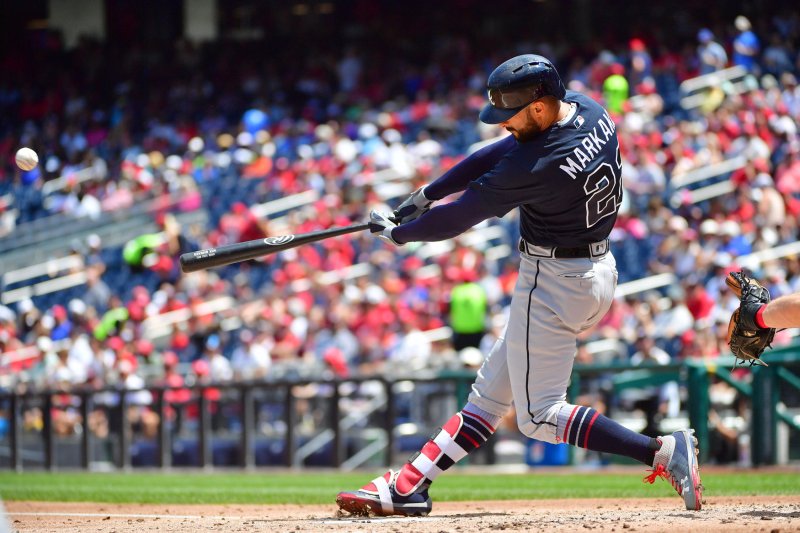 Atlanta Braves outfielder Nick Markakis (pictured) was entering his sixth season with the Braves. He was competing for a spot in the team's outfield after the off-season signing of slugger Marcell Ozuna. File Photo by Kevin Dietsch/UPI | License Photo

Markakis, 36, said he felt uneasy about playing the season without fans in attendance. He was then swayed by a phone conversation with Freeman, who has experienced a fever and other symptoms after testing positive for the coronavirus.

"Just hearing him, the way he sounded on the phone, it was tough," Markakis told reporters Monday. "It was kind of eye-opening. With everything that's going on, not just with baseball but all over the world, it makes you open your eyes."

Markakis became the second Braves player to opt out of MLB's 60-game restart. Over the weekend, veteran pitcher Felix Hernandez said he won't play this year.

Braves first-base coach Eric Young also will sit out of the upcoming season.

Markakis, a 14-year veteran, was entering his sixth season with the Braves. He was competing for a spot in the team's outfield after the off-season signing of slugger Marcell Ozuna.

Markakis, who was an All-Star selection in 2018, had a .285 batting average with nine home runs and 62 RBIs last season.

"Hopefully this isn't the end of my road," Markakis said. "We'll see how this season plays out going into next year. I'll base my decision off what happens after this year. I hope everybody stays healthy. I hope this virus gets kicked soon. ... When we have fans in the stands and there's a competitive edge, this is the best game.

"This is America's game right here. You just hate to see it in this state of mind. I get it, but when you're used to something for so long and they take it from you, it kind of puts things in perspective. I'm definitely going to miss it this year."

In 14 seasons between the Baltimore Orioles and Braves, Markakis has a .288 lifetime average with 188 home runs, 1,031 RBIs and 2,355 hits. According to Spotrac, he was set to earn a base salary of $4 million in 2020 before becoming an unrestricted free agent next year.