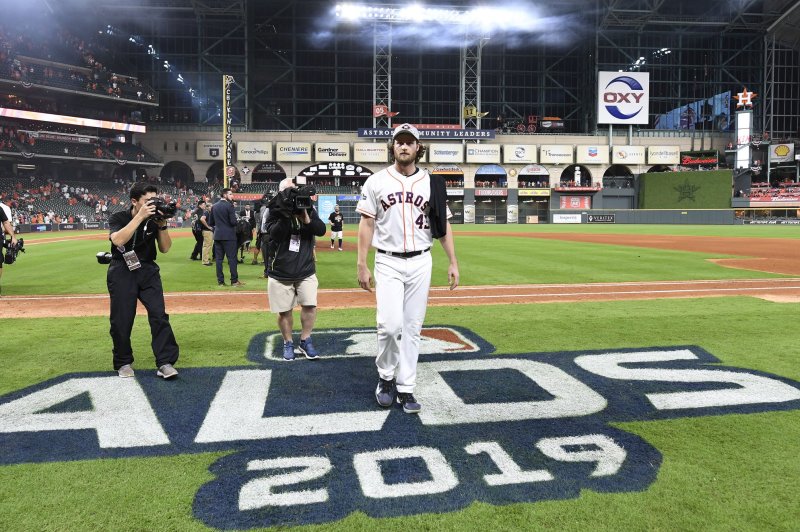 Turner Sports aired the 2019 National League Division Series between the Houston Astros and Tampa Bay Rays and will continue to air post-season games, along with Fox Sports, after a new deal with Major League Baseball. File Photo by Trask Smith/UPI | License Photo

June 15 (UPI) -- Major League Baseball has agreed to a billion-dollar broadcast deal with Turner Sports for the rights to air playoff games.

Sources informed ESPN and the New York Post of the agreement over the weekend. The pact comes as the 2020 MLB season remains suspended due to the coronavirus pandemic.

Turner aired the entire 2019 National League playoffs on TBS. The network will continue to have broadcast rights for a league championship series and regular-season and post-season clashes. The regular-season games air on Sunday afternoons.

MLB team owners and the players' union are in talks to start a 2020 season after the league suspended play during spring training because of the pandemic. The two parties have exchanged proposals but have yet to agree on prorated player compensation or the number of games the abbreviated regular season will include.

MLB players and the union responded to the news of the deal on social media, amid the stalemate in negotiations.

"It's now become apparent that [the players'] efforts have fallen upon deaf ears," MLB Players Association Executive Director Tony Clark said. "In recent days, owners have decried the supposed unprofitability of owning a baseball team and the commissioner has repeatedly threatened to schedule a dramatically shortened season unless players agree to hundreds of millions in further concessions. Our response has been consistent that such concessions are unwarranted, would be fundamentally unfair to players and that our sport deserves the fullest 2020 season possible. These remain our positions today, particularly in light of new reports regarding MLB's national television rights -- information we requested from the league weeks ago but were never provided.

"As a result, it unfortunately appears that further dialogue with the league would be futile. It's time to get back to work. Tell us when and where."

Turner's contract with MLB was scheduled to end after the 2021 season before the new pact. MLB also has a long-term broadcast contract with Fox for the other league championship series and the World Series.

MLB // 5 days ago
MLB: Pitchers to face ejections, 10-game bans for foreign substance use
June 15 (UPI) -- MLB pitchers will be ejected and receive 10-game suspensions for the use of foreign substances on baseballs as part of an expanded policy to prevent competitive advantages in the game, the league announced Tuesday.
Advertisement