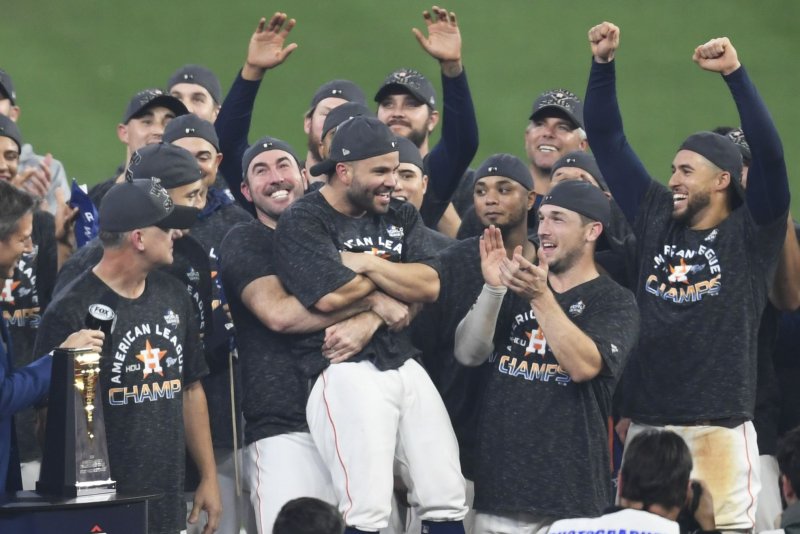 Oct. 21 (UPI) -- The Houston Astros host the Washington Nationals in Game 1 of the 2019 World Series Tuesday at Minute Maid Park.

Here are the latest betting odds and ticket price trends entering the series:

Houston opened Sunday as one of the biggest betting favorites in the history of the World Series, with -225 odds of beating Washington, according to Bovada. The Astros were -215 favorites to win as of Monday morning. Washington has +175 odds of winning the World Series. The means you would have to risk $215 to win $100 if betting on the Astros. You would win $175 if you bet $100 on the Nationals.

The Astros have -190 odds for winning Game 1, while the Nationals are at +165.Nationals ace Max Scherzer is set to face Astros star Gerrit Cole in the first game of the series. The Astros are favored by 1 1/2 runs in Game 1.

The 2019 World Series will broadcast on Fox.

The cheapest ticket on for Game 1 on major secondary marketplaces was listed at $356 on Vivid Seats as of Monday morning. The most expensive ticket was listed for more than $13,000 on StubHub, if accounting for extra fees.

Tickets were about $400 for Game 1 of the 2018 World Series between the Boston Red Sox and the Dodgers at Fenway Park in Boston. Those prices rose to more than $500 before first pitch. StubHub sold dugout box tickets for more than $15,000 apiece before Game 1 and Game 2 in Boston.

The 2016 Chicago Cubs had the most-expensive World Series ticket prices of any team in the last decade, according to TicketIQ, a site that tracks ticket prices on the secondary market. Tickets for the 2016 World Series had an average secondary market listing price of $6,641. The Nationals were second on that list at $4,239 before Game 1 of the National League Championship Series, but have since gone down to $2,069. The Astros' average ticket price of $1,498 for the series is about half of the price tickets were going for a day before their 2017 World Series began.

MLB // 15 hours ago
Dodgers' Trevor Bauer allows one hit, strikes out nine in win vs. Rockies
April 14 (UPI) -- Reigning Cy Young Award winner Trevor Bauer was nearly flawless, as he allowed just one hit and had nine strikeouts in seven scoreless innings in a Los Angeles Dodgers shutout of the Colorado Rockies at Dodger Stadium.

MLB // 16 hours ago
Goldschmidt, Arenado, Carpenter homer in Cardinals blowout of Nationals
April 14 (UPI) -- Paul Goldschmidt, Nolan Arenado and Matt Carpenter provided the power with a trio of home runs to lead the St. Louis Cardinals to a 14-3 thrashing of the Washington Nationals.