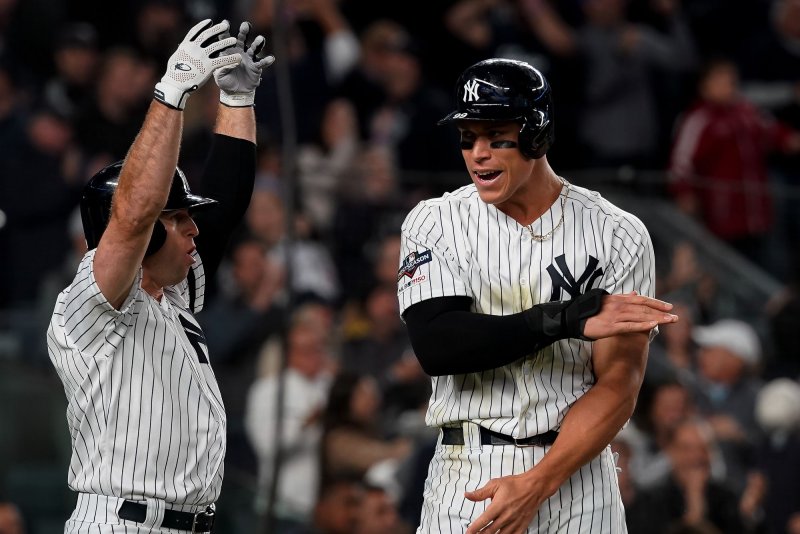 New York Yankees runners Brett Gardner and Aaron Judge (R) celebrate after they score against the Minnesota Twins in the fifth inning in Game 1 of the American League Division Series on Friday at Yankee Stadium in New York City. Photo by Ray Stubblebine/UPI | License Photo

New York Yankees second baseman Gleyber Torres drives in two runs with a double in the fifth inning against the Minnesota Twins in Game 1 of the American League Division Series on Friday at Yankee Stadium in New York City. Photo by John Angelillo/UPI | License Photo

Oct. 5 (UPI) -- DJ LeMahieu belted a home run and drove in four runs and Gleyber Torres had a two-run double to put New York ahead for good as the Yankees posted a 10-4 victory over the Minnesota Twins on Friday night in the AL Division Series opener.

The Yankees handed the Twins their MLB-record 14th consecutive defeat in the postseason, with 11 of those coming against New York since 2004.

The Twins jumped in front with a solo home run off the bat of shortstop Jorge Polanco in the first inning. Later in the third, designated hitter Nelson Cruz blasted another solo shot to give Minnesota an early 2-0 lead.

New York used a three-run third inning to erase the Twins' early advantage before Polanco recorded an RBI single in the top of the fifth to tie the game at three runs apiece.

The Yankees snapped the tie in the bottom of the fifth after Torres drove in Aaron Judge and Gardner with a two-run double. Twins slugger Miguel Sano answered with a solo homer in the sixth to cut the deficit to 5-4.

Later in the inning, LeMahieu and Gardner each homered to extend the Yankees' lead to 7-4. LeMahieu plated three more runs with a double in the seventh to seal the victory.

Game 2 of the best-of-five series is scheduled for Saturday in New York.

MLB // 3 hours ago
Nationals' Kyle Schwarber swats homer trio in win over Mets
June 21 (UPI) -- Veteran outfielder Kyle Schwarber turned around three fastballs for home runs to lead the Washington Nationals to a win over the New York Mets in a series finale at Nationals Park.

MLB // 3 days ago
Yankees make history with triple play vs. Blue Jays
June 18 (UPI) -- The New York Yankees completed their second triple play of the season in a win over the Toronto Blue Jays. The triple play was the first in MLB history completed in the order of position numbers 1-3-6-2-5-6.

MLB // 3 days ago
Indians smack four homers in win over Orioles
June 18 (UPI) -- The Cleveland Indians pounced all over the Baltimore Orioles pitching staff in their latest victory, with four players homering to cap off a four-game sweep in Cleveland.