Los Angeles Angels manager Brad Ausmus was signed to a three-year contract with the club. He guided the Angels to a 90-loss season this year. Photo by John Angelillo/UPI | License Photo

Sept. 30 (UPI) -- The Los Angeles Angels fired manager Brad Ausmus after only one season with the club, the team announced Monday.

In a statement released Monday afternoon, Angels general manager Billy Eppler thanked Ausmus for his contributions to the club and leading the team through "one of its most difficult seasons."

"I want to thank Brad for his hard work and dedication to this organization over the last two seasons as both a special assistant and field manager," Eppler said. "He navigated this franchise through one of its most difficult seasons with class and professionalism."

Eppler, who joined the Angels in October 2015, is expected to hold a news conference Tuesday. He selected Ausmus as his first hand-picked manager to lead the club after waiting for Mike Scioscia's contract to expire.

League sources told ESPN that Angels owner Arte Moreno holds former Chicago Cubs manager Joe Maddon in high regard and a reunion is possible. Maddon, who parted ways with the Cubs on Sunday, was a coach for the Angels from 1993 to 2005.

Maddon had success during a nine-year run while managing the Tampa Bay Rays before guiding the Cubs to the franchise's first World Series title in about 100 years. According to ESPN, Maddon wants to keep managing and is interested in the Angels' opening.

Under Ausmus, the Angels (72-90) finished 35 games behind the Houston Astros in the American League West this season, missing out on the MLB playoffs for the ninth time in the last 10 years. It marked the first time since 1999 that the club reached 90 losses in a single season. 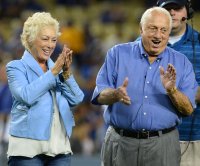