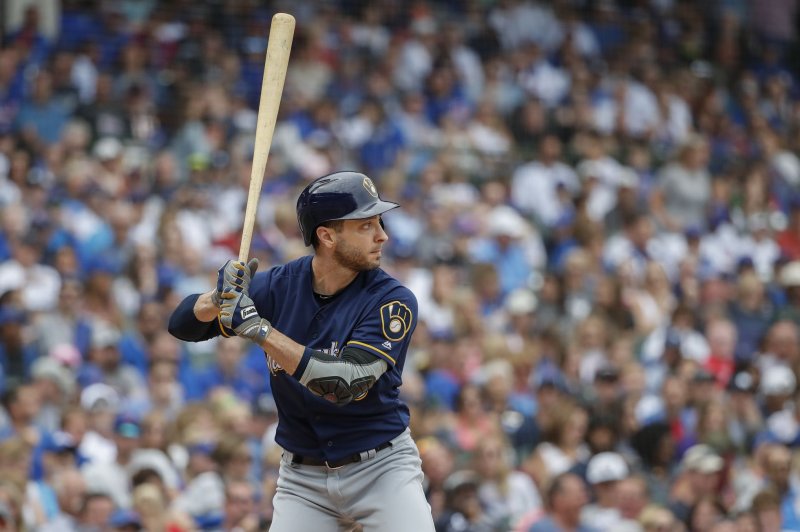 Sept. 26 (UPI) -- The Milwaukee Brewers are headed to the postseason for the second consecutive year after a 9-2 win against the Cincinnati Reds Wednesday night.

The Brewers moved to 88-70 with the victory at Great American Ball Park in Cincinnati. Milwaukee clinched a National League Wild Card playoff spot with the triumph.

The Brewers still have a shot to win the National League Central division, as they trail the St. Louis Cardinals by 1.5 games. Milwaukee's win eliminated the Chicago Cubs and New York Mets from playoff contention.

"I think this group really epitomizes what it is to be a team," Brewers veteran Ryan Braun told reporters. "We have had so many people contribute and there is nothing more enjoyable than getting to celebrate with teammates, coaching staff, ownership group, front office and everybody that is here.

Braun pushed Milwaukee in front with a first inning grand slam before Eric Thames followed with a solo shot in the next at-bat. The Brewers took a 6-0 lead in the opening frame by scoring on a ground out.

Reds slugger Eugenio Suarez answered with a solo homer in the bottom of the inning, smacking his 49th long ball of the season off Brewers starter Jordan Lyles.

Keston Hiura went deep for the Brewers with another solo home run in the second at-bat of the second inning. Yasmani Grandal gave Milwaukee an 8-1 lead with an RBI double in the third inning.

Reds catcher Tucker Barnhart ripped an RBI double in the fourth frame, making the score 8-2. Reds reliever Sal Romano hit Trent Grisham with a pitch with the bases loaded for the final run of the game in the seventh inning.

Lyles earned his 12th win of the season after allowing three hits and two runs in five innings. Reds starter Tyler Mahle took his 12th loss of 2019 after allowing seven hits and eight runs in 2.1 innings.

Braun went 1-for-2 with four RBIs and two runs scored in the win. Barnhart went 2-for-2 with two walks and an RBI for the Reds.

The Reds host the Brewers in the final game of the series at 12:35 p.m. EDT Thursday in Cincinnati. The Brewers have won 17 of their last 19 games and are on a six-game winning streak.

Kentucky Derby winner back on track, '23 Derby contenders try out in Kentucky , Japan