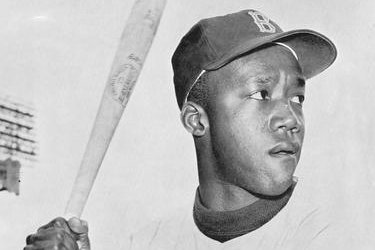 Green made his Major League debut as a pinch-runner on July 21, 1959. Boston was the last pre-expansion team to field a black player.

"We salute the courage Pumpsie Green demonstrated 60 years ago when he became our first player of color," Red Sox chairman Tom Werner said. "Despite the challenges he faced, he showed great resilience and took pride in wearing our uniform. He honored us by his presence. We send our deepest condolences to Pumpsie's family and friends."

Green threw out the ceremonial first pitch before a 2009 game to celebrate the 50th anniversary of his debut. He also threw out the first pitch in 2012 for Jackie Robinson Day and was inducted into Red Sox Hall of Fame in May 2018.

A moment of silence was held before Boston's game against the Toronto Blue Jays at Fenway Park.

"Pumpsie Green occupies a special place in our history," Red Sox principal owner John Henry said. "He was, by his own admission, a reluctant pioneer, but we will always remember him for his grace and perseverance in becoming our first African-American player.

"He paved the way for the many great Sox players of color who followed," Henry added. "For that, we all owe Pumpsie a debt of gratitude."