Blackmon had four hits in each of the Rockies' first three games. He finished with three hits in Sunday's 14-13 loss in Denver.

Buck Jordan of the Boston Braves had 14 hits against the St. Louis Cardinals from July 17 to July 18, 1934; those games were played as part of consecutive doubleheaders. St. Louis' Bill White joined the small club in a more traditional manner, recording 14 hits in a four-game set against the Chicago Cubs from July 12 to July 15, 1961, according to MLB.com.

"The beauty of the Charlie is the consistency, day in and day out," Rockies manager Bud Black said. "That's one of Charlie's strengths, what he does each and every day to prepare to play. He's one of the best I've seen."

Blackmon became the first player since former Dodgers shortstop Rafael Furcal to record three consecutive four-hit games. Furcal accomplished the feat from May 13 to May 15, 2007.

Blackmon said he couldn't properly celebrate the record because Colorado split the four-game series. The Rockies blew two ninth-inning leads and are only 37-34 this season.

"The last three games were five hours, four hours, five hours," Blackmon said. "It's just really hard to go out there, play that much baseball at altitude. To end up a split, it's disappointing." 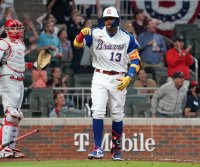 MLB // 1 day ago
Monday's Twins-Athletics game postponed due to COVID-19 issues
April 18 (UPI) -- MLB has postponed Monday's game between the Minnesota Twins and Oakland Athletics at Oakland Coliseum to allow the Twins organization to conduct testing and contact tracing for COVID-19.