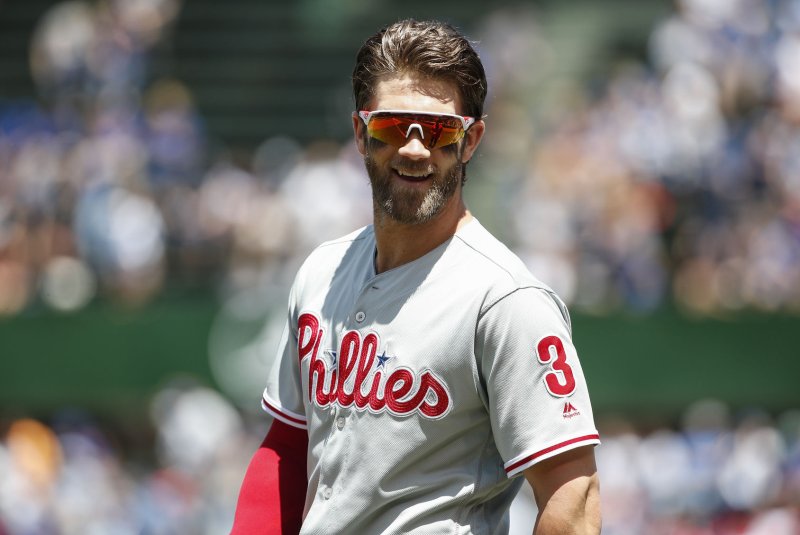 June 17 (UPI) -- Blooper, the Atlanta Braves mascot, pulled off a lucrative stunt by stealing Bryce Harper's $330 million contract before a 15-1 win against the Philadelphia Phillies.

The Braves mascot now has more than $600 million to his name following Sunday's stunt at SunTrust Park in Atlanta. Blooper pulled off the same stunt when he duped San Diego Padres star Manny Machado into signing over his $300 million pact in May.

On Sunday, Blooper sported a judge's robe and wig. He called Harper over into foul territory and showed him a board reading "I declare June 16, 2019 'National Bryce Harper Day.'"

The sign also read: "Signed by order and in behalf of" and had a spot for Blooper and Harper to sign. Blooper refereed to himself as the 'Mayor of Atlanta' and had the Philly Phanatic sign his name as the "Mayor of Philly.'

Harper took the pen and put his signature on the bottom right corner of the document. Blooper then ripped off his costume and removed the front piece of the board to reveal a giant check for $330 million. The Braves mascot then took off running while being chased by Harper. The Phillies star got the check back, before Blooper swiped it once more and ran off to the outfield.

Harper was 1-for-3 with an RBI, a walk and a strikeout in the loss. He is hitting .247 in his first season with the Phillies.

MLB // 14 hours ago
Braves' Adam Duvall gets 3-run homer converted to 2-run single
Sept. 23 (UPI) -- Atlanta Braves outfielder Adam Duvall appeared to hit his 40th home run of the season, but the hit was ruled a single due to an odd base-running error during a win over the Arizona Diamondbacks.