Babe Ruth played with the New York Yankees from 1920 to 1934. Photo by Jimdob/Wikimedia Commons

The jersey, which was a road uniform and dates from between 1928 and 1930, broke the previous mark of $4.4 million for a 1920 Ruth jersey, Hunt Auctions announced. The auction was held at Yankee Stadium.

Ruth's granddaughter, Linda Ruth Tosetti, said the jersey -- as well as over 400 other items -- was sold with the intent "to further his legacy within a new generation of baseball fans."

"Babe's collection has remained largely unknown to the general public, and we felt it was time to bring these amazing pieces of his life to light," she said. "There could be no other place to showcase these items than Yankee Stadium, and we are also thrilled to be able to benefit related charitable entities through the sale of these items."

The buyer of the jersey has not been identified.

The historic jersey has "YANKEES" across the front. New York only wore such jerseys from 1927 to 1930.

Ruth played with the Yankees from 1920 to 1934. He retired midway through the 1935 season and was inducted into the National Baseball Hall of Fame in 1936. 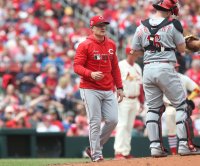