May 29 (UPI) -- A Chicago White Sox employee drilled a photographer with her ceremonial first pitch before the team's win against the Kansas City Royals.

The high and very outside offering came before Chicago's 4-3 victory on Tuesday at Guaranteed Rate Field in Chicago. The woman, who was being honored for Employee of the Month, took the hill and prepared to throw the pitch to White Sox pitcher Evan Marshall, who was acting as temporary catcher.

She settled in for the offering, before releasing the ball. The pitch sailed to her left, hitting team photographer, Darren Georgia, who was standing just feet away. The ball slammed into his camera as he backpedaled away from the area.

"I honestly didn't even see it coming," Georgia told NBC Sports Chicago. "I took the photo and it just hit the camera. It didn't hit my head. The camera is OK. I'm OK. I'm just shocked."

Georgia said he was able to snap a photo just before being hit by the ball. The White Sox posted the photo on Twitter.

A Twitter user tweeted that she is the woman's daughter.

"On behalf of my mother, we would like to extend our apologies!!! Hope you got a good shot out of it," she tweeted.

She also tweeted a photo of the ball, which had a scuff mark on it.

The White Sox host the Royals again at 8:10 p.m. Wednesday in Chicago.

MLB // 20 hours ago
Cody Bellinger, Dodgers rally for 6-5 win over Braves in Game 3 of NLCS
Oct. 19 (UPI) -- Behind stars Cody Bellinger and Mookie Betts, the Los Angeles Dodgers stormed back to beat the Atlanta Braves 6-5 in Tuesday's Game 3 of the National League Championship Series at Dodger Stadium.

MLB // 5 days ago
Dodgers, controversial call end Giants' season in Game 5 of NLDS
Oct. 15 (UPI) -- After chasing the Giants in the National League West division all season, the Dodgers finished off their Northern California rivals in the playoffs on Thursday night -- in a game that ended on a controversial call. 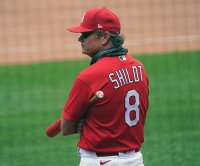