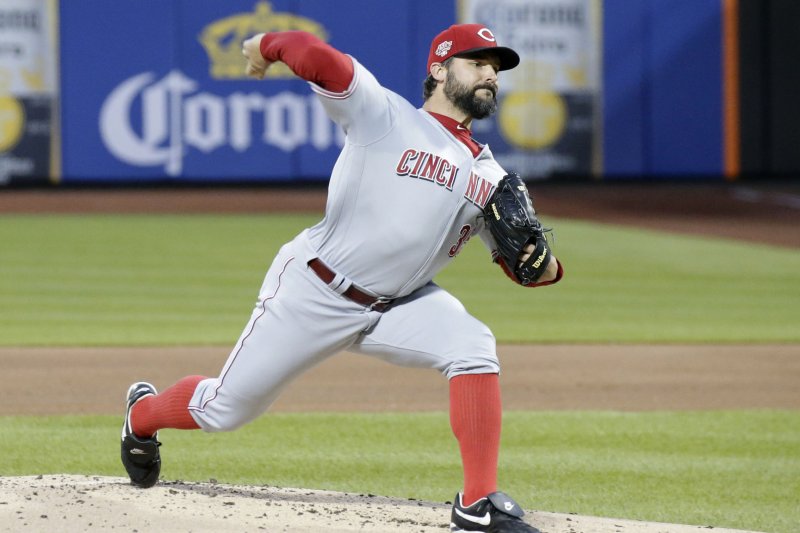 April 30 (UPI) -- The Cincinnati Reds slipped by the New York Mets after getting a ninth inning home run from Jesse Winker.

Winker whacked the go-ahead solo shot in the top of the frame, giving the Reds a 5-4 win on Monday at Citi Field in Queens.

The Mets attempted to rally in the bottom of the frame. Wilson Ramos doubled in Michael Conforto for New York's first run. Amed Rosario plated Ramos with an RBI single in the same inning, making the score 4-2.

Cincinnati's pitching unraveled in the fourth frame, allowing the Mets to tie the score. Reds starter Tanner Roark got Ramos and Rosario out to start the inning. Roark then walked Juan Lagares before allowing a single to Zack Wheeler.

Roark then issued another free pass to Jeff McNeil, loading the bases. The Reds right-handed pitcher issued yet another walk to Mets rookie Pete Alonso in the next exchange, bringing in New York's third run.

Cincinnati replaced Roark with Wandy Peralta to face Brandon Nimmo in the next at-bat. Peralta walked Nimmo on four pitches, tying the score at 4-4, before getting Michael Conforto to ground out and end the inning.

Neither squad scored a run over the next four innings. Mets reliever Edwin Diaz took the mound in the top of the final frame to face Reds star Joey Votto. Diaz got Votto to fly out to center field before doing the same to Suarez.

Winker stepped into the box next. Diaz grooved in a 95.8 mph fastball for his first offering of the exchange. The Reds left fielder hammered the pitch to deep right center field, giving Cincinnati a late lead. Winker's blast traveled 415 feet and had an exit velocity of 105 mph, according to Statcast. The solo shot had a launch angle of 27 degrees.

"I just wanted to put a good swing on it, and it got up and got out," Winker told reporters, according to MLB.com. "It was one of those games you are fighting for a run any way you can."

Reds closer Raisel Iglesias secured the victory by striking out the final three Mets in order, earning his first win of the season.

The Reds and Mets battle in the second game of the series at 7:10 p.m. on Tuesday in Queens.