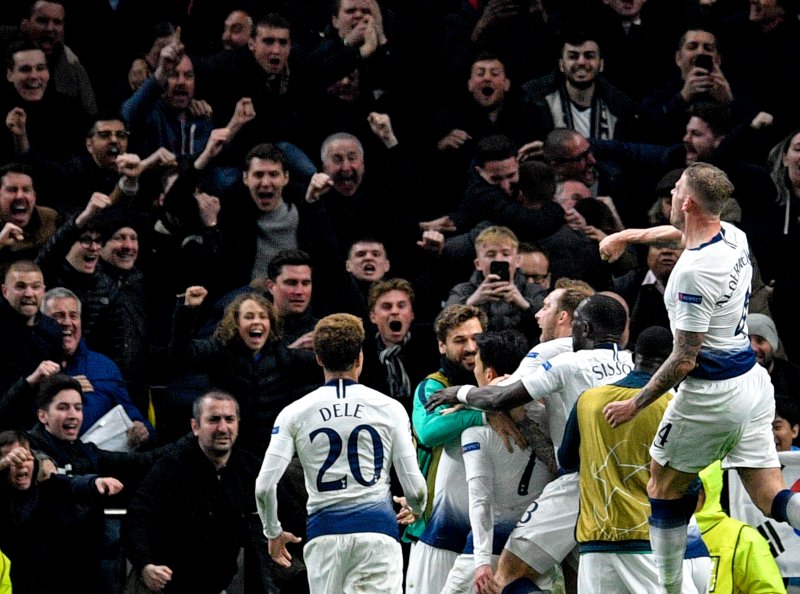 Tottenham's Son Heung-min (7) was mobbed by teammates after scoring the only goal to beat Manchester City in a Champions League quarterfinal matchup Tuesday in London. Photo by Neil Hall/EPA-EFE

April 10 (UPI) -- Tottenham Hotspur star Son Heung-min barely managed to keep the ball from going out of bounds before scoring against Manchester City in the Champions League.

Son's sensational score came in the 78th minute of Spurs' 1-0 win against the Sky Blues in the first leg of a Champions League quarterfinals matchup Tuesday at Tottenham Hotspur Stadium in London.

Fellow winger Christian Eriksen sent a pass into the right corner of the box during the possession, leading Son toward the goal. The Spurs star timed his run perfectly, tapping the feed toward the end line. The ball appeared to be carrying out of bounds, but Son kept it in play with the outside of his right boot.

He turned the ball away from City keeper Ederson before dancing around defenders and blasting a shot through traffic. The rip beat Ederson to the far post netting and was enough for the Spurs to win.

"It's only the first leg but I am happy with our performance with a good approach from the beginning," Spurs manager Mauricio Pochettino told TottenhamHotspur.com.

"We were so aggressive and we were very clever in the way that we played. There is a lot of work to do now -- we need to recover and try to prepare for Saturday."

Tottenham Hotspur will play the second leg of the Champions League quarterfinals at Manchester City next Wednesday.