Golden State Warriors head coach Steve Kerr added himself to the Bryce Harper recruitment team by asking the slugger to come to the Bay Area before a game against the Miami Heat on Sunday in Oakland. Photo by Larry W. Smith/EPA

Kerr made his plea for the prized free agent before the Warriors edged the Miami Heat 120-118 on Sunday in Oakland. Harper has been linked to a bounty of teams this offseason, but the Giants recently emerged as an interested party. The former Washington Nationals slugger visited with front office executives last week.

"Bryce, come to the Giants. Let's go," Kerr told reporters, as he held up his thumbs.

"That would be fun," Kerr added. "I would love it if Bryce Harper came here. Does my opinion count here?"

The Giants are one of the franchises located closest to Harper's home in Las Vegas.

Giants president of baseball operations Farhan Zaidi told reporters that their is "mutual interest" between the Bay Area franchise and Harper.

"There is obviously mutual interest on both sides," Zaidi said. "We thought it made sense to get together. We had a good conversation over a few hours. He's obviously got a lot of suitors and a lot of interest. He's going to have some decisions to make."

Giants manager Bruce Bochy and agent Scott Boras joined Harper and his wife at the meeting. 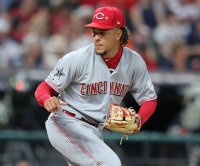