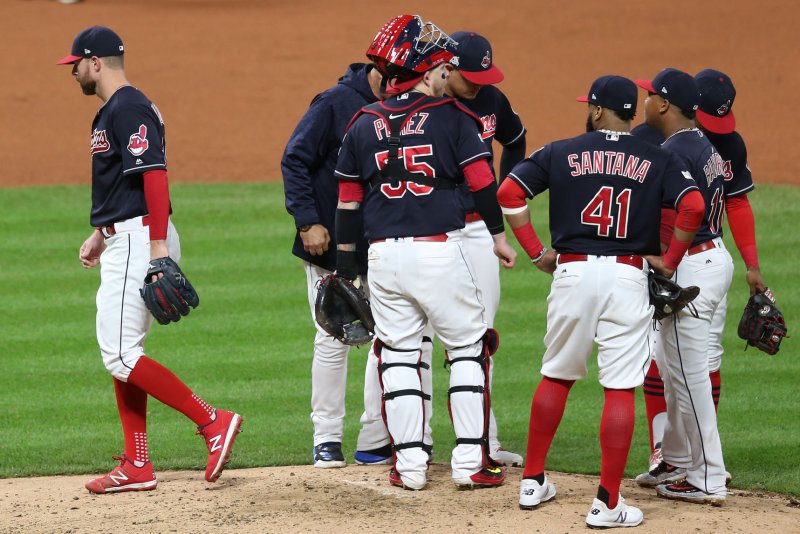 Cleveland Indians starter Corey Kluber is under contract for 2019 and has team options in 2020 and 2021. He is expected to still be with the Tribe entering spring training, despite being linked to several teams in trade rumors this offseason. File Photo by Aaron Josefczyk/UPI | License Photo

Feb. 11 (UPI) -- Corey Kluber is a near lock to remain with the Cleveland Indians as trade talks have been hushed heading into opening day.

Sources told MLB.com that there is "almost no chance" Kluber will be traded before the start of spring training. The two-time Cy Young Award winner has been the subject of trade talks between the Indians, Cincinnati Reds, San Diego Padres, Milwaukee Brewers, New York Yankees and Los Angeles Dodgers, but a deal never materialized.

Kluber, 32, posted a 2.89 ERA and a 20-7 record last season in 33 starts. The eight-year veteran made the American League All-Star team for the third consecutive season. Kluber led baseball with 18 wins, a 2.25 ERA, five complete games and three shutouts in 29 starts during his 2017 campaign.

The right-handed pitcher is expected at Indians spring training, with pitchers and catchers reporting for official workouts on Thursday.

Sources told MLB.com in January that the Indians wanted to reduce their payroll this offseason. The team is on pace to have a reduction of about $20 million in salaries this season compared to last season at this time.