By Stephen Pianovich, The Sports Xchange

The Braves will continue their season next week in the National League Division Series and are still fighting for home-field advantage. The Phillies are finishing out a disappointing end to their season.

Gausman will get his final regular-season tuneup before joining Atlanta's postseason rotation.

The right-hander, acquired from the Baltimore Orioles at the trade deadline, has been terrific for the Braves in nine starts. Gausman has bolstered the Braves' rotation with a 2.80 ERA and 1.10 WHIP since the trade.

Gausman's latest start came against the Phillies on Sept. 20. He struck out seven and gave up three runs and five hits in 6 1/3 innings.

"These games mean a lot," Gausman, who hasn't pitched in the playoffs since 2014, told MLB.com after the game. "As a player, that's all you can ask for -- to be in September and to be playing meaningful games. To be a pitcher coming from Baltimore with the season we were having there, the playoffs were a far-fetched dream. So to be in this situation is great."

Gausman discussed the difference between pitching in the regular season and postseason.

"The biggest difference is how draining every pitch is," Gausman told the Atlanta Journal-Constitution. "You're sitting in the dugout or you're out there pitching, every pitch means so much. You give up one run, and that might be it that night. There's a premium on runs, so as a pitcher, it's on you a little more than it is the regular season."

Gausman only has two career starts against the Phillies, allowing eight runs in 11 1/3 innings (6.35 ERA) in those games. Jorge Alfaro is 4-for-6 with a home run, double and four RBIs versus Gausman while Jose Bautista is 6-for-26 with a home run and five strikeouts.

The Braves won Gausman's last start and it began a season-worst losing streak for the Phillies.

The Phillies snapped a nine-game losing streak Saturday, but have completely collapsed in September, going 7-20 in the month. Philadelphia, who was 15 games above .500 on Aug. 7, head into the final day of the season with a 79-82 record. It's the seventh season in a row the Phillies have failed to finish above .500.

"We've been playing terrible baseball," first-year Phillies manager Gabe Kapler told reporters after Friday night's loss. "That's why we've lost a lot of games, not because we haven't fought or because anybody quit."

The Phillies are 33-42 against the NL East this season and 6-12 against Atlanta.

Suarez, 23, will make his fourth appearance and third start of the season for Philadelphia. Suarez, who has never faced the Braves, has an 8.00 ERA in his two major league starts, but he did not allow an earned run in three innings out of the Phillies' bullpen Monday against the Rockies.

Suarez, who could vie for a spot in Philadelphia's rotation in 2019, last started Aug. 16 when the Phillies lost 24-4 to the New York Mets. He allowed eight runs (four earned) and 11 hits while walking two and striking out two.

MLB // 4 days ago
MLB enters first lockout in 26 years
Dec. 2 (UPI) -- Major League Baseball and the MLB Players' Association failed to complete a new labor agreement before the expiration of the previous pact, leading team owners to enforce the first work stoppage since 1994-95. 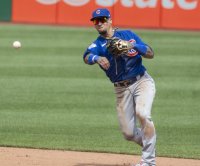