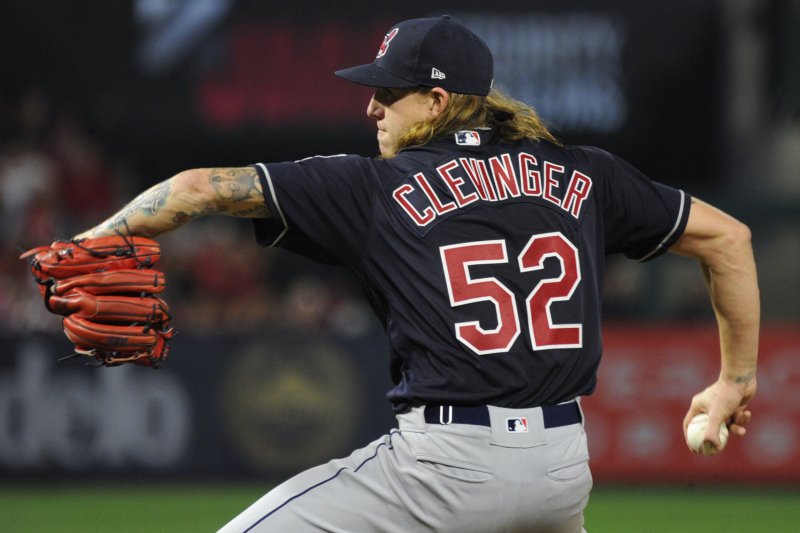 Mike Clevinger and the Cleveland Indians take on the Kansas City Royals on Friday. Photo by Lori Shepler/UPI. | License Photo

Mike Clevinger will make his last start of the regular season for the Cleveland Indians on Friday night against the Kansas City Royals at Kauffman Stadium.

When and where Clevinger's next start take place remains to be seen.

All that's known is that Clevinger's next appearance will be sometime during the Indians' American League Division Series versus the Houston Astros. That series begins Friday in Houston.

Corey Kluber and Carlos Carrasco will start the first two games of the Division Series. Clevinger could be used out of the bullpen in those games or, if he doesn't pitch in either game as a reliever, he will likely start Game 3.

That decision has yet to be made by Indians manager Terry Francona and his staff, but Clevinger said he's ready for whatever role he fills in the postseason.

"I don't know what's set in stone so far," Clevinger told MLB.com. "But I obviously want to pitch as much as possible. I'd definitely like to get to start. Whatever (Francona) thinks is best."

Francona has a lot on his plate these days. In addition to setting up his rotation for the Division Series, he has been trying to give some of his position players occasional days off over the last week, but still trying to keep all his players sharp for the team's third consecutive trip to the postseason.

"I'm just trying to balance guys playing," Francona told MLB.com. "I know people are paying to watch these games. I don't ever want it to feel like there's disrespect. So we try to put enough out there and do it at the right time."

Clevinger's numbers this year are very similar to last year, when he was 12-6 with a 3.11 ERA. This year he is 12-8 with a 3.07 ERA. The biggest difference is his innings pitched: 121 2/3 last year, 193 this year. He is one of four Indians starting pitchers with more than 200 strikeouts -- the first time in major league history a team has had four 200-strikeout pitchers.

Clevinger's last start was a no-decision Sept. 22, a 5-4 Cleveland victory over Boston. Clevinger pitched five innings, allowing two runs and three hits, with six strikeouts and five walks. His last start against Kansas City was a 9-3 victory Sept. 4, in which he pitched six innings, giving up one run and three hits, with 10 strikeouts and one walk.

RELATED Mariners' Felix Hernandez starting vs. A's after 18 days out

In four starts against the Royals this year, Clevinger is 2-0 with a 2.33 ERA. In nine career appearances (eight starts) against Kansas City he is 5-0 with a 2.37 ERA.

Kansas City's Friday starter will be veteran right-hander Ian Kennedy (3-8, 4.59). After missing nearly two months with an oblique strain, Kennedy was activated off the disabled list Sept. 9. He is 2-0 with a 1.89 ERA in three starts since.

His last start was a 4-3 victory over Detroit on Sept. 21, when he pitched seven innings, allowing three runs (two earned) and seven hits, with six strikeouts and no walks.

His only start against the Indians this year was a good one, a 1-0 win April 7 in which he pitched six scoreless innings on four hits, with eight strikeouts and no walks.