Indians look to close in on division title vs. Blue Jays 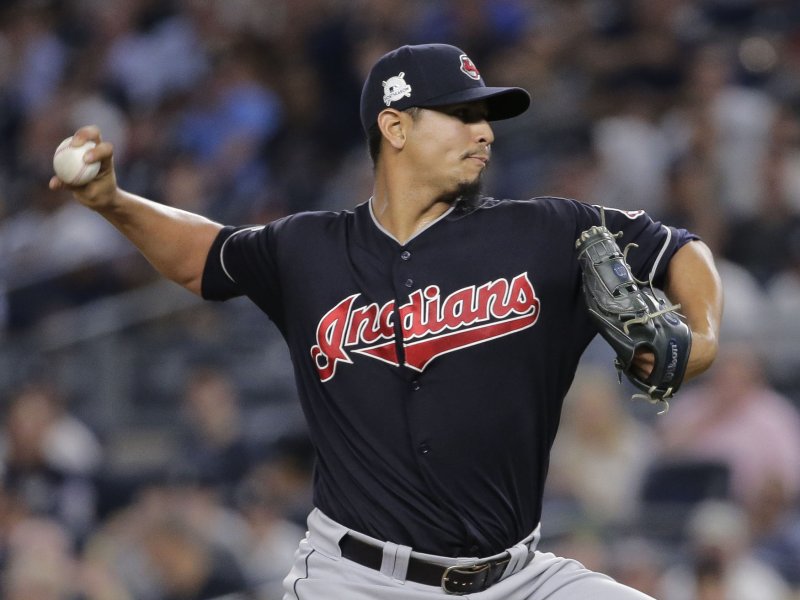 TORONTO - There is little suspense left in the American League Central race for the Cleveland Indians. It is just a matter of when they make it official.

They can move another step closer to a division title Friday night when they play the Toronto Blue Jays in the second game of a four-game series at the Rogers Centre.

The Indians (80-60) reduced their magic number to clinch to seven in the AL Central with a 9-4 win over the Blue Jays (63-77) on Thursday. Any combination of Indians wins or losses by the second-place Minnesota Twins that totals seven or more will clinch a third consecutive division title for Cleveland.

"They've had some injury issues, but they've got a hell of a team, a real good lineup," Blue Jays manager John Gibbons said. "Now they've added to that, of course. And they even brought back old Melky (Cabrera), who's playing pretty well. And they've always had good pitching over there. They've had to battle to get a couple of their guys healthy, but you've got (Corey) Kluber and some other guys. And then their bullpen, they picked up (Andrew) Miller. They've added a few pieces over there. They got as good a shot as anybody."

The Indians defeated the Blue Jays in five games in the 2016 American League Championship Series.

Both teams made some history on Thursday.

Blue Jays first baseman Rowdy Tellez, who had doubled in his first major-league plate appearance Wednesday when used as a pinch hitter, made his first start in the majors at first base Thursday. He continued his double spree with three of them in the game and had an RBI.

Not to be outdone, Indians shortstop Francisco Lindor led off the game with his first of two home runs in the game. It was his seventh career leadoff home run of the season, tying Grady Sizemore for the club record. He has eight multi-homer games in his career and six this season. His six multi-homer games out of the leadoff spot this season are the most by any player in major league history.

The Indians had 13 hits Thursday while playing without Michael Brantley, who sat out with a bruised left foot. It was the result of fouling a ball off the top of the foot during the third inning of the 3-1 win over the Kansas City Royals on Wednesday.

"He finished off the game OK, but he got on the flight and it got stiff, so we'll give him (Thursday off) to kind of let the trainers do their stuff, but he'll be fine."

Friday will be the second time Carrasco has faced the Blue Jays this season. He did not factor in the decision May 3 at Progressive Field in the first game of the doubleheader, a 13-11 Blue Jays win. He allowed six runs, nine hits and three walks in 5 1/3 innings.

His previous start at the Rogers Centre was May 9, 2017, when he pitched seven shutout innings, allowing three hits and striking out seven in Cleveland's 4-2 win.

Estrada has struggled recently, partly because of back issues. He is 0-2 with a 15.63 ERA in his past two starts.

This will be Estrada's first start of the season against the Indians. In three career starts against them, he is 0-1 with a 5.40 ERA.