Mariners hope to bring fight to O's in series finale

By Gene Warnick, The Sports Xchange

The Seattle Mariners showed they've still got some fight left in them.

But Tuesday that came via a pregame skirmish in the clubhouse before they went out to lose 5-3 to the visiting Baltimore Orioles, the team with the worst record in the major leagues.

"Things happen in a clubhouse. You're talking about 25 -- or now in this case, now 35 -- of the most competitive guys you're ever gonna be around, and you spend basically every waking moment together all the time," said Mariners manager Scott Servais, who was out on the field when the scuffle took place.

Perhaps the strain of seeing their playoff hopes diminishing by the day -- the Mariners have the longest postseason drought in the four major professional sports, having not qualified for the postseason since 2001 -- finally got to the players.

The Mariners, who were 11 1/2 games ahead of Oakland in the chase for the American League's second and final playoff berth in mid-June, now find themselves 5 1/2 games back of the Athletics with 23 games remaining.

"Certainly, how our season has played out, we just haven't been consistent," Servais said. "And the frustration mounts from a number of different places."

As members of the media stood waiting for Servais near the doors of the Mariners' clubhouse before the game, second baseman Dee Gordon approached and asked quietly, "Could you guys clear out of the clubhouse for just a few minutes, please?"

Shortly thereafter, yelling could be heard and a dogpile briefly pushed the clubhouse doors open with some players on the ground, according to MLB.com.

Sources told The Seattle Times the incident was between Gordon and shortstop Jean Segura and apparently was about Gordon's misplay on a ball in center field during Monday's victory against the Orioles.

"I mean, you know what's on the line for Seattle," Orioles manager Buck Showalter said after the game. "You know they're trying to operate on all cylinders."

The Orioles overcame a 1-0 deficit with a four-run seventh, sparked by a leadoff home run by Renato Nunez. Another run scored when Jonathan Villar got trapped in a rundown between first and second on a flyball to left field, allowing Breyvic Valera to score from second.

"We had been working on that all spring training. First of all, it's kind of a mistake that gets rewarded," Showalter said. "Quite frankly, you shouldn't go on that ball, and a lot of people just give up, but he stopped and got the rundown going. That's baseball moxie. How do you draw that up? ... Came out smelling like a rose. Some people call that aggressive, some people call it reckless. We need a little bit of that, quite frankly."

The Mariners will attempt to take the finale of the three-game series Wednesday, when they send right-hander Mike Leake (8-9, 4.25 ERA) to the mound against Baltimore right-hander Andrew Cashner (4-13, 4.87).

Leake does not have a decision with a 7.36 ERA in two career starts against the Orioles while Cashner is 2-4 with a 4.09 ERA in 10 appearances (nine starts) against Seattle. 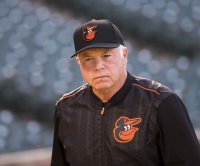 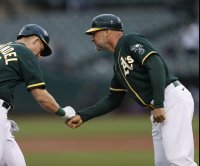