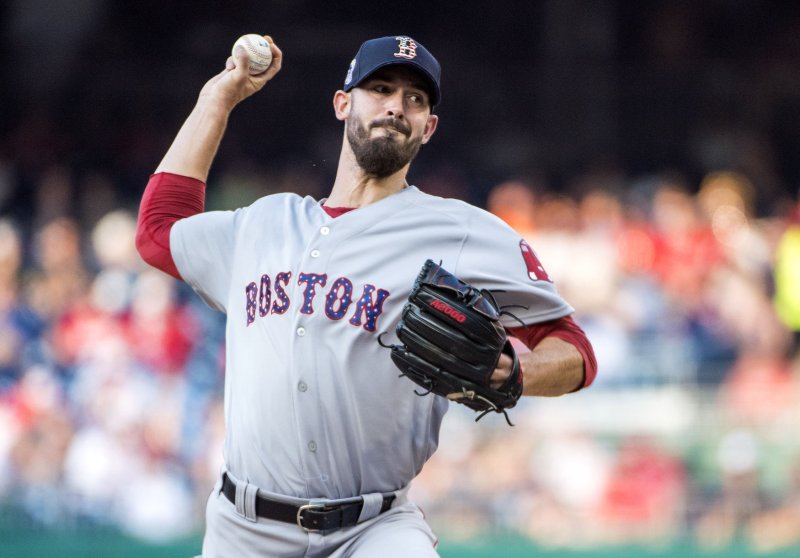 Rick Porcello and the Boston Red Sox take on the Atlanta Braves on Tuesday. Photo by Kevin Dietsch/UPI | License Photo

ATLANTA -- Sean Newcomb had an occasional rough outing before his near no-hitter, but now they have become nearly the norm for the Atlanta Braves left-hander.

Since falling one strike short of a no-no against the Los Angeles Dodgers on July 29, Newcomb has allowed 18 runs in 13 1/3 innings during three starts at SunTrust Park.

Newcomb will try to get back on track Tuesday night, but it won't be easy against the Boston Red Sox, who have the best record in the majors.

The American League East-leading Red Sox (95-44) won the opener 8-2 on Labor Day, but the Braves remained four games ahead of the Philadelphia Phillies in the National League East thanks to the Phillies' 3-1 loss at Miami.

The Braves will employ a six-man rotation the rest of the season and Newcomb could be the chief beneficiary. He owns a 2.73 ERA with five or more days of rest compared to a 5.61 ERA with the regular four days off between starts.

"They show you the numbers, and it's there," Braves manager Brian Snitker said. "I'm open to all the new things, the differences. It's good."

Until his recent struggles, one of worst outings by Newcomb -- a Massachusetts native -- had been against the Red Sox in Boston during May.

The 25-year-old lasted just three innings and gave up three runs and six hits with four walks and four strikeouts.

Newcomb had a 6.35 ERA in August, but Porcello wasn't much better at 5.11 despite starting the month with a one-hit, complete game against the New York Yankees.

Porcello, who last won Aug. 14, has allowed 12 runs in 17 innings in his past three starts.

The 29-year-old right-hander didn't face the Braves in Boston during May, but is 2-1 with a 3.32 ERA in three career starts against Atlanta.

Counting right fielder Nick Markakis' time with Baltimore, he had the most success of any Braves hitter against Porcello. Markakis has a .379 batting average in 29 at-bats with a home run.

Porcello has won both of his interleague starts this season, posting a 2.08 ERA while defeating Washington and Philadelphia. He has faced National League teams 39 times with Detroit and Boston, going 20-8 with a 4.13 ERA.

Newcomb hasn't fared well against the American League. He is 1-3 with a 7.62 ERA in five interleague starts in 2018 and one last year as a rookie, the lone victory coming this season versus Tampa Bay.

Third baseman Rafael Devers, on the disabled list since Aug. 17 with a left hamstring strain, will join the Red Sox on Tuesday after playing six rehab games with Triple-A Pawtucket and hitting a homer on Saturday.

The Red Sox will also promote veteran second baseman Brandon Phillips, who signed a minor league deal with the team in July and hit .302 in 38 games for Pawtucket.

"He had plenty of opt-outs and decided to stay with the team," Boston manager Joey Cora said of the 37-year-old Phillips, a three-time All-Star with Cincinnati. " ... He wants to be part of this. I think he can contribute. He's a guy who can hit against lefties."