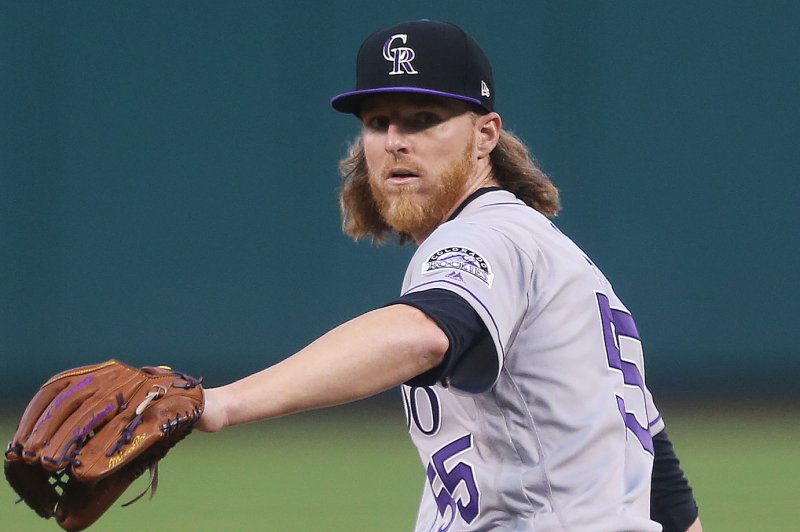 DENVER -- The Colorado Rockies will be riding an impressive winning streak behind Jon Gray when the right-hander starts Wednesday against the San Diego Padres.

The Rockies have won Gray's past eight starts, dating from June 22. During that streak, which is tied for the second longest in franchise history, Gray is 3-0 with a 3.04 ERA, 11 walks and 57 strikeouts in 53 1/3 innings. Opponents have batted .214 with a .624 OPS against Gray during that stretch.

Six of those eight wins have come since Gray was recalled on July 14 from Triple-A Albuquerque, where he made two starts after being optioned June 30. Since being recalled, Gray has gone 2-0 with a 2.55 ERA in six starts.

Asked what has been at the root of Gray's surge, Rockies catcher Chris Iannetta said, "I think his ability to throw strikes with all of his pitches. He's really throwing a lot of strikes with that slider, throwing a lot of strikes with the fastball, challenging guys. Not necessarily trying to get contact, but he's pitching in the zone a lot more, and I think that's been the biggest difference is just having that mentality of, 'Here it is, hit it. This is my best stuff. If you beat me, you beat me. If not, I'm probably going to have a lot of success with what I have.' "

Gray has had three straight no-decisions, the last one coming at Atlanta on Thursday when he allowed five hits and three runs in seven innings with one walk and nine strikeouts in Colorado's 5-3 win.

Nix, 22, began the season at Double-A San Antonio, where he went 2-3 with a 2.05 ERA in nine starts before being promoted to Triple-A El Paso. He pitched six scoreless innings and won his one start there before he joined the Padres after they designated veteran Phil Hughes for assignment.

Nix lost his last start 5-1 Thursday against Arizona, a 42-pitch effort in which he gave up five hits, five runs and two walks in two-thirds of an inning. He became the first Padres pitcher this season not to get out of the first inning.

"I really liked his response, taking ownership over it like recognizing, 'Hey, I wasn't good today. I've done that before though,'" Padres manager Andy Green said. "He knows he rebounds from things like this. So there's clearly some resiliency inside of him, and that's what it takes to pitch well at this level for a long time. He has good self-awareness, and he recognized it got going fast for him. And I think everybody that's ever stepped on a big league mound would say that about themselves at a point in time.

"I like the curveball playing early in counts and dropping it in wherever he wants. And the changeup looked really good, especially the first outing. So there's stuff to believe in and the temperament seems like he's wired right. There's no soft spot on our schedule going forward, so every single time he steps on the mound, it's going to be a challenge. And we're going to bet on that temperament to rise up and meet that challenge."