There are several names being tossed around when people talk about the American League Cy Young Award.

Blake Snell's name has to be in the discussion.

And Tuesday night, Snell, in his first full season in the major leagues, will try to pitch his Tampa Bay Rays to their third straight shutout.

The left-hander, a starter gem in the midst of a team using "openers" from the bullpen more often than actual starters, takes a 14-5 record and 2.10 ERA to the mound against Kansas City rookie Glenn Sparkman in the second contest of a four-game series at the Trop in St. Petersburg, Fla., on Tuesday night.

Sparkman, a Rule 5 draft pick by the Toronto Blue Jays later returned to the Royals, makes his second career start for K.C.

Snell has turned in a pair of five-inning shutout efforts and is 6-1 with a 0.99 ERA in his last eight starts, a span interrupted by a brief stay on the disabled list with left shoulder fatigue.

He is the Rays' first 14-game winner since Matt Moore won 17 in 2013 and pitched in the All-Star Game but only as a replacement after the players failed to vote him in.

Former teammate David Price, long a fan of his fellow lefty, was talking over the weekend about Snell eventually being selected, saying, "Thank goodness. The fact that he wasn't voted in by the players, that was bad."

Snell lost his only career start against the Royals last season.

Monday night, Hunter Wood was the "opener," worked the first 1 2/3 innings before Ryan Yarbrough pitched 5 1/3 of two-hit relief en route to the 1-0 victory.

The Rays, improving to 23-28 in a whopping 50 one-run games, scored a run on a review in the second inning. The run was awarded after Willy Adames was called out on a play at first but the call was reversed and he had an RBI single.

Yarbrough (12-5) struck out six and notched his major league-high 10th relief victory as the Rays moved back to three games over .500 on the season.

Jorge Lopez (0-3) threw 95 pitches and allowed the only run Monday night -- in his second start with the Royals after coming over in the Mike Moustakas trade. He gave up five hits, none of them hard, but was the hard-luck loser.

"He could have gotten quicker decisions (on hitters)," K.C. manager Ned Yost said. "They were pitches that could have gone either way. ... But I thought he threw the ball extremely well."

The Royals scored six runs in the second inning at Chicago on Sunday, but have been shut out in 16 straight innings since.

Danny Duffy, on the 10-day disabled list with left shoulder impingement, threw a bullpen Monday and said he felt fine. How he feels Tuesday will determine if he comes off the DL to pitch Thursday night's finale. 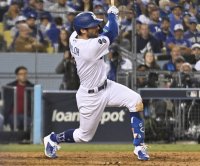 MLB // 2 days ago
Rosario homers twice, leads Braves to 3-1 NLCS lead over Dodgers
Oct. 21 (UPI) -- Left fielder Eddie Rosario collected four hits, including two homers, to lead the Atlanta Braves to a Game 4 win and a 3-1 NLCS lead over the Los Angeles Dodgers. The Braves are one win from a World Series berth.