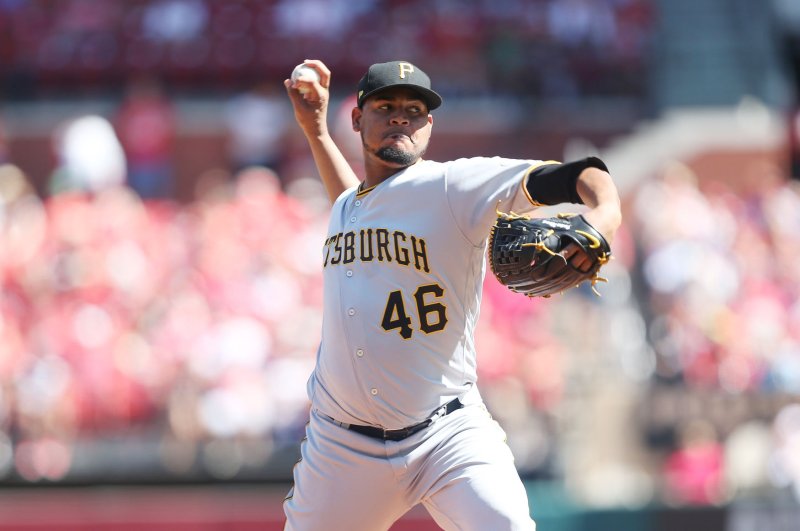 Ivan Nova and the Pittsburgh Pirates take on the Atlanta Braves on Tuesday. Photo by Bill Greenblatt/UPI | License Photo

The opener of a three-game series between the Atlanta Braves and the Pittsburgh Pirates was as tight as could be, yet left the clubs in opposing spots going into the second game Tuesday at PNC Park.

In the teams' first meeting of the season, Atlanta got a feel-good 1-0 win behind five scoreless innings from Bryse Wilson in the right-hander's major league debut. He was promoted from Triple-A Gwinnett to make a spot start and help the rotation to be a little fresher with everyone being moved back a day.

The Braves (69-55), who were able to put a four-game weekend sweep by Colorado in the rear-view mirror, moved a game up on Philadelphia in the National League East.

"Big," Atlanta manager Brian Snitker said of winning a close game after the losing streak. "Because there were a couple others it seemed like we were an out away from winning, probably three out of the (previous) four. You go through it. It happens, and (the win Monday) was big."

Pittsburgh has scored just five runs in those five games, wasting some strong pitching performances as they have allowed one run in each of the five games.

"I think we'd all like to score runs," Pirates manager Clint Hurdle said. "From that standpoint, guys are up their battling."

A couple of things add both injury and insult to the Pirates' lot lately.

Monday starter Chris Archer left after four innings because of left leg pain stemming from the third inning, when he corkscrewed awkwardly while striking out at the plate.

Pittsburgh already was without second baseman Josh Harrison, who has a sore hamstring he got running to first Sunday. Center fielder Starling Marte was benched Monday for lacking hustle twice on the base paths and drawing boos from the home fans Sunday, although Marte was used as a pinch-hitter in the ninth Monday. He grounded out.

RELATED Blue Jays hope to continue to be birds of prey vs. Orioles

"I just encouraged him (about) effort. It's always about effort," Hurdle said of his huddle with Marte about his benching.

This season, he has won two starts in a row and three in his past four, giving up eight runs and six walks, with 17 strikeouts. That includes going 2-1 with a 2.84 ERA since he joined the Braves from Baltimore.

Nova has won three of his past four decisions and five of his past seven, but was victimized by a seemingly contagious lack of run support his last time out during a four-game series against the Cubs when Pittsburgh scored just five runs.

On Thursday, the only run Nova gave up came on a solo home run in 6 2/3 innings, along with seven hits, three strikeouts and -- for the 11th time this season -- no walks, but Pittsburgh lost 1-0.

"I thought he pitched a really good game," Hurdle said of Nova. "He used his complete arsenal."

Nova's lifetime numbers against the Braves are strong: 3-0 with a 1.69 ERA in three starts.