Aug. 18 (UPI) -- San Diego Padres first baseman Eric Hosmer got a little help from a fan -- and his beer -- during a home run against the Arizona Diamondbacks.

Then Hosmer stepped up to the plate. The 6-foot-4, 225-pound infielder received two consecutive balls to go ahead in the count. He then ripped a 94.5 mph Ray fastball to deep center field.

Diamondbacks left fielder Jon Jay raced back to the warning track, eying the second out of the inning. He timed his jump, appearing to rob the long ball. But a fan reached over the fence and put his full beer cup right in Jay's glove. The Diamondbacks outfielder and the ball both hit the beer simultaneously, spilling the cold brew everywhere and sending the ball over the fence.

Jay looked up in disappointment as the fan -- who was wearing a Padres jersey -- was congratulated by fellow fans. The umpires conferred to see if they should call fan interference on the play, but they allowed the homer. The fan consulted a concession stand attendant for another beer.

Hosmer's homer went 365 feet and had an exit velocity of 98 mph, according to Statcast. He now has 12 home runs and 51 RBIs this season for the Padres. The Diamondbacks put up three runs in the next inning to take control of the contest. Hosmer went 2-for-5 with two RBIs and a run scored in the loss. 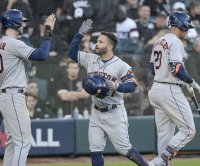