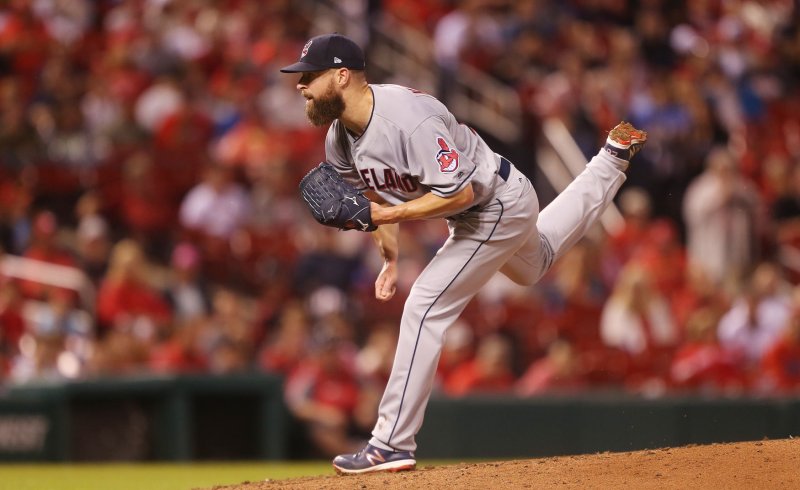 Corey Kluber and the Cleveland Indians take on the Cincinnati Reds on Tuesday. Photo by Bill Greenblatt/UPI | License Photo

The Cleveland Indians own a huge lead in the American League Central, and all they're doing now is waiting until the playoffs arrive. Once they get there, they know they've got the roster depth and the talent to go far.

They showed off their ability during a 10-3 interleague win over the intrastate rival Cincinnati Reds on Monday night. Now they'll send out ace Corey Kluber (14-6), who's in the Cy Young Award hunt once again, to start the second game of the three-game series Tuesday night at Great American Ball Park.

Even with all that's going right with the Indians, they're dealing with the lack of a proven center fielder. So the news they got Monday wasn't encouraging on the baseball front, even if it was encouraging to everyone in the organization.

Leonys Martin, the outfielder they obtained from the Detroit Tigers on July 31 to fill the gap in center field, is recovering at Cleveland Clinic from a bacterial infection that became life-threatening last week. However, general manager Chris Antonetti is confident Martin will make a full recovery, although it will take some time.

Antonetti told reporters that Martin's situation could have been much worse, and that his recovery could end up being measured in weeks rather than days. He wouldn't speculate when Martin might play again.

"I haven't even thought about baseball," Antonetti told reporters in Cincinnati. "He's got a long path to full health in front of him. It's going to take some time, but we're in a much better spot than we were 24 to 36 hours ago."

Martin's absence leaves Greg Allen, who's hitting .232, and Rajai Davis, who's hitting .247 with only one homer in 174 at-bats, as the Indians' center fielders. Unless one of them breaks out down the stretch or Antonetti deals for another outfielder before Sept. 1, the Indians with have a discernible hole in their lineup once the postseason arrives.

RELATED Sanchez hopes to start for Braves vs. Marlins

"I'm trying to put together some good at-bats, see some pitches and run the bases (well)," Allen said after the game.

On Monday, Jason Kipnis had a two-run double and Melky Cabrera had a two-run single during a seven-run Indians sixth inning, and Jose Ramirez hit his 35th homer and drove in three runs.

Ramirez set a club record for homers in a season by a switch hitter. Allen went 1-for-5.

"We took some good swings and scored five times with two out (in the sixth) and that was huge," Indians manager Terry Francona said.

Since the Reds won the first two games of the season series last month, the Indians have won the last two by a combined score of 29-7. But this game could have been different if the Reds hadn't twice left the bases loaded in the early innings and finished 1-for-9 with runners in scoring position.

"It seems that's the nature of modern day baseball, the hits to drive people in are tough to come by and (then) people hit homers," Reds interim manager Jim Riggleman said.

The Reds' best pitcher was infielder Brandon Dixon, who used a knuckleball to retire all three batters he faced in the ninth, so tying up Ramirez that he lost his bat flailing at a third strike.

Kluber is 3-0 with a 1.96 ERA in three career starts against the Reds, but he will face them for the first time since July 18, 2015. He dealt with an intestinal issue during the weekend in Chicago but he said he expects to be fine to start.

Kluber will face Reds right-hander Sal Romano (7-9), the winner in a 7-4 Reds victory over the Indians on July 10 at Progressive Field in his only career start against them. Romano allowed three earned runs and five hits in 7 1/3 innings.

His last time out, Romano beat the New York Mets 6-1 last Tuesday, limiting them to one run and two hits in six innings.

The last-place Reds, who are 15 games below .500, had been 15-5 against first-place teams since June 21 before losing to the Arizona Diamondbacks 9-2 on Sunday and the Indians on Monday.