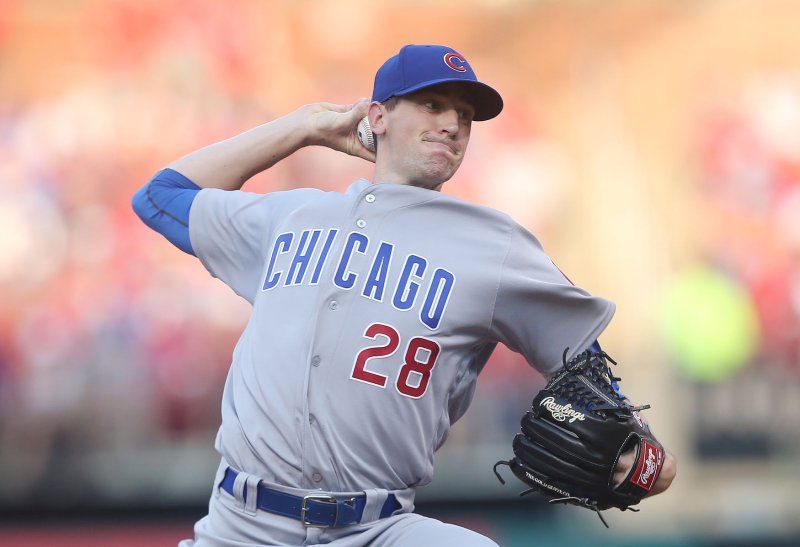 Kyle Hendricks and the Chicago Cubs take on the Washington Nationals on Friday. Photo by Bill Greenblatt/UPI | License Photo

CHICAGO -- For a couple of teams that started the season with aspirations of winning their respective division and more, the Chicago Cubs and Washington Nationals scuffled through the season, fighting inconsistency at every turn.

The Cubs enter Friday's game against the Nationals atop the National League Central despite going just 4-3 in a seven-game stretch against a pair of last-place teams. Chicago is coming off a 9-0 loss to the Kansas City Royals that prevented the Cubs from completing a sweep they hoped to use to build momentum heading into this weekend's three-game series with the Nationals.

Chicago was held to just three hits and will now try to ramp things back up as they attempt to build a cushion in the Central. Manager Joe Maddon doesn't expect that to be easy.

"I don't think you're going to see a lot of space created the rest of the year by anybody," Maddon told reporters after Wednesday's loss, according to the Chicago Tribune. "I think it's going to be like what you're seeing."

For the Cubs, that means surviving what's been a season-long ride of ups and downs. While the Cubs have managed to avoid too many valleys, they have never found a way to put together sustained stretches of success, either.

Despite not playing as well against the Royals and their fellow basement dweller San Diego Padres, who managed to split a four-game series with the Cubs last weekend at Wrigley Field, first baseman Anthony Rizzo said he and his teammates have to move on.

"Do you think we should just dwell on it, especially on this team?" Rizzo said Wednesday, according to the Tribune.

Kyle Hendricks (8-9, 4.07 ERA) will start out the series for Chicago. Hendricks has been better of late and has won his last two starts. He allowed four runs and struck out seven over five innings in his last start against the Padres. Hendricks is 2-2 with a 2.67 in five career starts against the Nationals.

Washington enters Friday's series opener having won seven of its last 10 games. The Nationals used a strong performance from Gio Gonzalez in a 6-3 win over the Atlanta Braves on Thursday that earned the Nationals a split in the four-game series.

The Nationals won despite not having Bryce Harper in the lineup. Harper was scratched after being hit in the leg by a pitch on Wednesday. Harper will likely be ready to return Friday and is hitting .339 with five home runs and 17 RBIs since the All-Star break.

"It's pretty swollen still," manager Dave Martinez told reporters Thursday, according to MLB.com. "Rather than him try to play through it, we thought the best option would be to have him come off the bench."

Gonzalez, who had been 0-6 in his last 11 starts since his last victory, took advantage of plenty of run support in Thursday's victory. Now Washington will attempt to keep trending in the right direction against a Cubs team that will be coming off an off-day.

Friday's game will be a bit of a homecoming for Martinez, who worked as Maddon's bench coach in Chicago before taking his first managerial position. Martinez was on the Cubs staff that led Chicago to a World Series title in 2016.

Jeremy Hellickson (5-2, 3.56) will start the series for the Nationals, having won three of his previous five starts. Hellickson allowed a pair of runs on four hits over 5 2/3 innings in his last start against the Cincinnati Reds. Hellickson is 1-1 with a 7.59 ERA in two career starts against the Cubs.