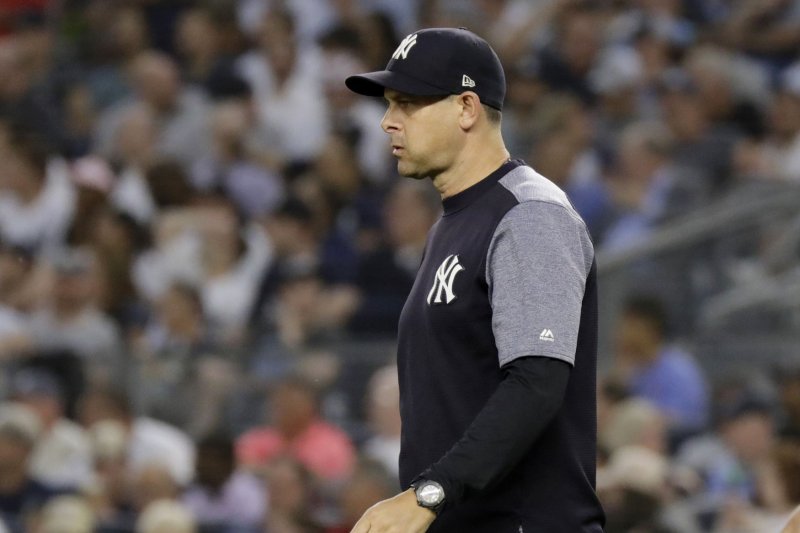 New York Yankees manager Aaron Boone walks to the mound for a pitcher change in the third inning against the Seattle Mariners on June 20, 2018 at Yankee Stadium in New York City. Photo by John Angelillo/UPI | License Photo

CHICAGO -- In what has been a slow and steady rebuilding process, the Chicago White Sox have stressed patience, which requires its fair share of waiting for things to happen.

Whether it means waiting for young talent to develop or for star prospects to reach the major leagues, the White Sox have continued to believe that good things will happen in time.

But for the first time in nearly a year, the White Sox can boast a series sweep as they prepare to host the New York Yankees starting Monday.

The White Sox enter Monday's series opener having won four straight games after they finished off a sweep of the Tampa Bay Rays with an 8-7 victory on Sunday. The sweep was Chicago's first since they won three straight games against the Houston Astros last August.

Daniel Palka finished off the win with a go-ahead solo home run in the ninth inning.

As much as the White Sox have struggled this season, they have shown improvement since the All-Star break by playing .500 ball, which has built confidence heading into Monday's home test against New York.

"The second half has been pretty strong," Palka told reporters Sunday, according to the team's official website. "I don't think it's ultimately as good as we actually are. Some things haven't come together, but it's been a good start to the second half.

Dylan Covey (4-7, 5.57 ERA) will start Monday for the White Sox. Covey will be looking for his first victory since July 21 and has dropped his last two starts. Covey allowed seven runs (four earned) over 4 1/3 innings in his last start against the Los Angeles Angels. Covey is 0-1 with a 14.40 ERA in his lone career start against the Yankees.

Following a 10-inning loss Sunday to the Boston Red Sox that extended their losing streak to a season-high five games, the Yankees won't have much turnaround time as they prepare to face the White Sox. The Yankees blew a 4-1 lead in the ninth and then lost the game on a walk-off single by Andrew Benintendi surrendered by Jonathan Holder. Aroldis Chapman surrendered three runs in the ninth.

"We're too good to let this define us," Yankees manager Aaron Boone said. "We will move from this and we have got a big series starting tomorrow."

The Yankees are 3-6 without Aaron Judge, who has yet to swing a bat since he fractured his right wrist after being hit by a pitch on July 26 against Kansas City. It remains unclear as to when Judge will return and his progress toward returning to the lineup will be determined by how much pain he can tolerate during the process.

"It's not something he's going to hurt more -- but it is a chip in there, a broken wrist, so you've got to get it right," Boone told reporters, according to MLB.com. "The pain will tell you that."

Judge attempted to throw a baseball over the weekend but said how quickly he can think about returning will all depend on when he can swing a bat.

"It's not healed yet," Judge told reporters. "It's going to take a while for that to heal up. But some of the range of motion is coming back, and now it's just getting the strength back."

Lance Lynn (7-8, 4.89 ERA) will make his first start for the Yankees when he takes the mound Monday, a week after being acquired from the Minnesota Twins. Lynn threw 4 1/3 scoreless innings and struck out five in relief in Wednesday's 7-5 loss to the Baltimore Orioles, but was thrust into the starting rotation after general manager Brian Cashman announced Lynn would replace Sonny Gray in the rotation and move Gray to the bullpen.

Lynn is 2-1 with a 2.67 ERA in five career starts against the White Sox. He faced Chicago twice this season with the Twins.