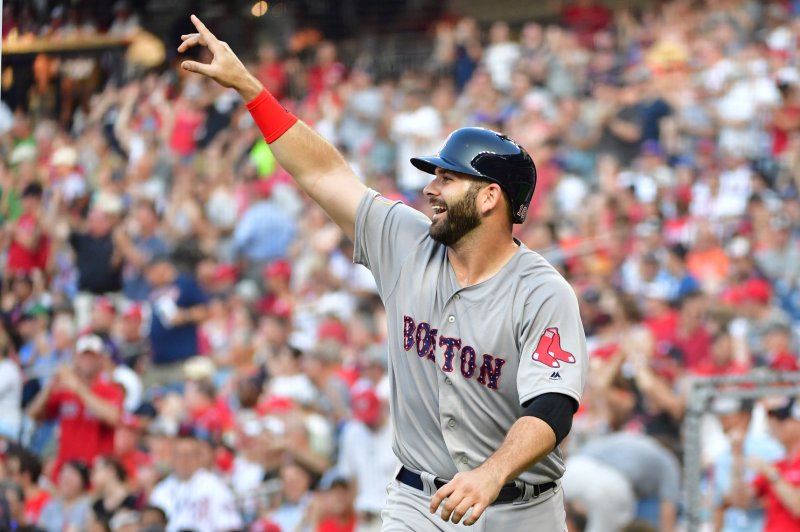 Boston Red Sox first baseman Mitch Moreland (18) celebrates after scoring off of a three-run double hit by pitcher Rick Porcello against the Washington Nationals in the second inning on July 2 at Nationals Park in Washington, D.C. Photo by Kevin Dietsch/UPI | License Photo

TORONTO -- The Boston Red Sox continue their dream season Tuesday night when they open a three-game series at the Rogers Centre against the Toronto Blue Jays, whose season is more of a nightmare.

The Red Sox (79-34) are coming off the high of a four-game sweep of their longtime rivals, the New York Yankees, that included a game-tying, three-run ninth inning Sunday night at Fenway Park and a 5-4, 10-inning win.

"I'm proud of them," Red Sox manager Alex Cora said. "They're playing well. They don't get caught up in the whole thing. They show up every day. They digest the information. They go out there and play and they win games. They win a lot of games."

The Blue Jays (51-60), meanwhile, failed to compete their own four-game sweep of the Seattle Mariners on Sunday afternoon when they lost 6-3 at Safeco Field, completing a 5-5 road trip. As usual in Seattle, there was a huge attendance of Blue Jays fans, most of them from western Canada, where baseball fans have made Toronto's series in Seattle each season an annual trek.

"It's unique here. You're not going to find this anywhere else," Blue Jays manager John Gibbons said. "Wins have been few and far between this year and they got to see three of them."

Wins may have been scarce for the Blue Jays this season, but the Red Sox can hardly do anything but win during what has been a magical season.

The Red Sox's winning percentage of .699 matches the fourth-best record through 113 games since divisions were introduced in 1969. Those other teams -- the 1998 Yankees, the 2001 Mariners, 2017 Los Angeles Dodgers and 1969 Baltimore Orioles -- averaged 111 regular-season victories with only the 1998 Yankees going on to win the World Series.

"It's fun," Red Sox outfielder J.D. Martinez said. "This is a fun team. It's a very humble team, I feel like. We don't have any of those egos on this team. It seems like a close group of guys, guys who like to have fun."

The Blue Jays will be facing an old teammate in outfielder/infielder Steve Pearce, who was traded to Boston at the end of June and has batted .333/.431/.667 with five homers and 14 RBIs for Boston in 20 games. He had three homers in the opener of the four-game sweep of the Yankees and another in the second game.

There have been some bright spots lately for the Blue Jays, despite unloading pitchers J.A. Happ, Roberto Osuna, Seunghwan Oh and John Axford in trades before the July 31 deadline for deals without waivers. There could be other trades during August.

Blue Jays shortstop Aledmys Diaz had five home runs during the past trip, including a two-run shot that temporarily tied the score on Sunday. He batted .357 (10-for-28) with seven RBIs on the trip.

Pomeranz will be making his third start since a spell on the disabled list June 2-July 23 with biceps tendinitis. He allowed two runs in five innings to the Philadelphia Phillies on July 31 and four runs in 4 1/3 innings on July 24 against the Baltimore Orioles.

Stroman had won his two previous starts before he lost to the Oakland Athletics on Aug. 1, allowing 11 hits and seven runs in five innings. He is 0-1 with a 5.40 ERA in one start against the Red Sox this season and is 4-3 with 4.28 against them in 11 career starts.