The specter of the non-waiver trade deadline looms over both the Cincinnati Reds and Detroit Tigers.

Players on both sides of those non-contenders can breathe a little easier once it passes by on Tuesday afternoon.

Both front offices have been trying to move veteran players for prospects in a buyer's market. Once the uneasiness is lifted at the 4 p.m. ET deadline, the remaining players can get down to business as the Reds visit the Tigers for a two-game series beginning Tuesday night.

Tigers manager Ron Gardenhire said last week that the players should take a positive view of potentially getting moved to a contender.

"When somebody wants you, that's a good thing in this game," Gardenhire told the Detroit News. "If someone is interested, and would like to have you pitch (or play) for them, I'm happy for him.

"This is the time of year, guys, all of them, want to play or get into the playoffs. You never want to stop them if they get that opportunity. I've been there a few times and that's kind of the route you want to go. That's when it's really fun and real entertaining."

The scheduled starting pitchers for Tuesday's game haven't experienced much joy this season, but they're both coming off encouraging outings.

Reds right-hander Homer Bailey was activated from the disabled list and delivered a quality start. He gave up two runs and five hits with eight strikeouts in 6 2/3 innings against St. Louis on Wednesday. He wound up with a no-decision in a 4-2 extra-innings loss.

Bailey threw 115 pitches in his first start since May 28. He was sidelined by right knee inflammation, then appeared in seven minor league games during his rehab assignment.

"I'd rather get a win," Bailey said during his postgame press conference. "We had a couple of pitches working that we were able to get some swings and misses on. Really, there were only a few that they did damage on."

Bailey (1-7, 6.29 ERA) had given up at least three earned runs in his last nine starts before the DL stint.

"That was one of the best starts we have had from anyone all year," Reds interim manager Jim Riggleman said to MLB.com.

Bailey has only faced the Tigers once in his career and got a no-decision while allowing three runs in 6 2/3 innings.

Detroit starter Matthew Boyd (5-9, 4.53) notched his first victory since June 7 on Wednesday. He held Kansas City to two runs and seven hits in six innings with seven strikeouts. Boyd didn't issue a walk in the 8-4 win.

"I don't put much weight on the (personal) wins and losses either way," Boyd told the Detroit News. "It's when you don't give your team a chance to win, that's when it hurts you."

Boyd found success by working at a quicker pace and relying more on his fastball.

"What you have to do is speed up hitters," Gardenhire said. "He can locate it pretty good, and when he can pound that fastball in and away, it gets them off his other stuff. It makes him that much better."

Boyd lost his lone career start against the Reds, giving up five runs in four innings. 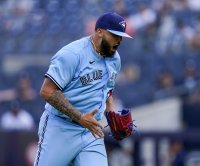 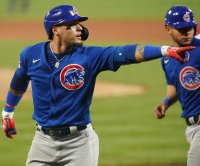 MLB // 1 day ago
Nationals' Kyle Schwarber swats homer trio in win over Mets
June 21 (UPI) -- Veteran outfielder Kyle Schwarber turned around three fastballs for home runs to lead the Washington Nationals to a win over the New York Mets in a series finale at Nationals Park.

MLB // 4 days ago
Yankees make history with triple play vs. Blue Jays
June 18 (UPI) -- The New York Yankees completed their second triple play of the season in a win over the Toronto Blue Jays. The triple play was the first in MLB history completed in the order of position numbers 1-3-6-2-5-6.

MLB // 4 days ago
Indians smack four homers in win over Orioles
June 18 (UPI) -- The Cleveland Indians pounced all over the Baltimore Orioles pitching staff in their latest victory, with four players homering to cap off a four-game sweep in Cleveland.