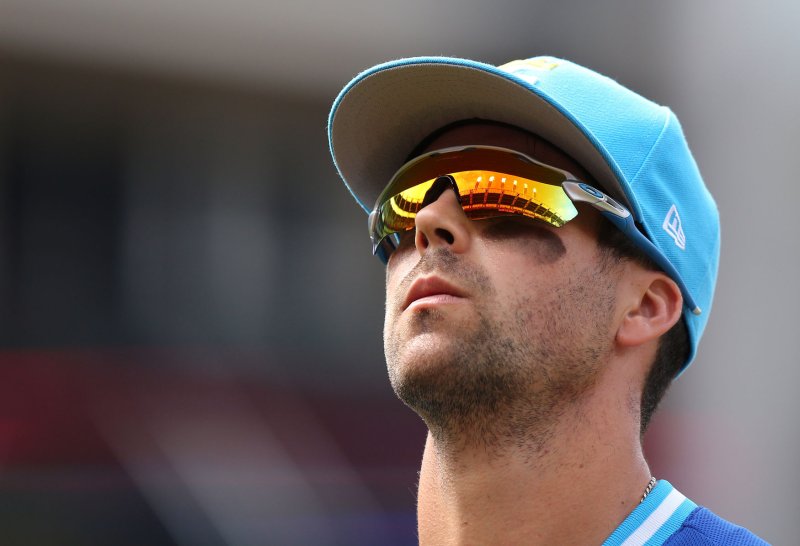 Whit Merrifield wasn't happy about being left off the American League All-Star team when rosters were announced Sunday night.

The Kansas City Royals' super-utility man certainly had a valid argument. He came into the Royals' three-game series at Minnesota batting .303 with five home runs, 29 RBIs and 16 stolen bases but it wasn't enough to merit inclusion on the ballots of fans, players or coaches.

"A little bit (disappointed)," Merrifield told MLB.com. "I kind of had an outside chance to make it, so I had (my) hopes up a little.

"But (teammate Salvator Perez, the Royals' lone representative) is one of the best catchers in the league. He's not having his best year, but he is an All-Star on reputation. Hopefully someday (I'll have that reputation). I just do what I can. Hopefully something like that will follow me in my career. Right now, I'm just working on getting better every day."

After going 1-for-4 Monday night in the series opener, he'll be back in the Royals' lineup again Tuesday when they try to snap a 10-game losing streak behind right-hander Ian Kennedy, who will start for the first time since suffering an oblique strain that landed him on the disabled list back on July 3.

The muscle acted up on Kennedy during his last start, a 4-1 Royals loss at Seattle on July 1, when he allowed three runs on three hits, including a pair of home runs while striking out four over five innings of work.

He took his eighth loss of the season in that contest and will be looking for his first victory since April 7 when he returns to the mound against the Twins, who have won five games in a row, tying their longest winning streak of the season.

Aaron Slegers gets the nod for his second career start as Minnesota goes for No. 6.

He made a strong impression his last time out, holding the Orioles to a run on three hits over six innings of work. The only blemish on his line was a solo home run by Jonathan Schoop. It was enough for the Twins to give the 6-foot-10 right-hander another shot as they try to fill the fifth spot in their rotation.

"I know he's been working on things, always trying to find ways to improve your repertoire, if you will," Twins manager Paul Molitor said after Sleger faced Baltimore. "Working on that little one-seam fastball, which he seemed to get a lot of really good results, as far as getting in on the righties and getting some grounders from the lefties.

RELATED Yankees look to take care of business vs. Orioles

"I thought he had a good night, mixed in enough changeups and sliders to keep them guessing a little bit. Gave up the home run to Schoop there on a fastball, but mostly he was good. We talked a little bit about trying to extend him, but you get 18 outs from a guy, with three hits and one run, I thought it was a good note to turn it over to the bullpen and see if we could hold on."

Minnesota's fifth-round pick in the 2013 draft, Slegers had a 3.55 ERA in 14 starts with Triple-A Rochester this season. His only other big-league appearance this season came back on May 30, when he allowed two runs over 5 1/3 innings of relief in a loss at Kansas City.