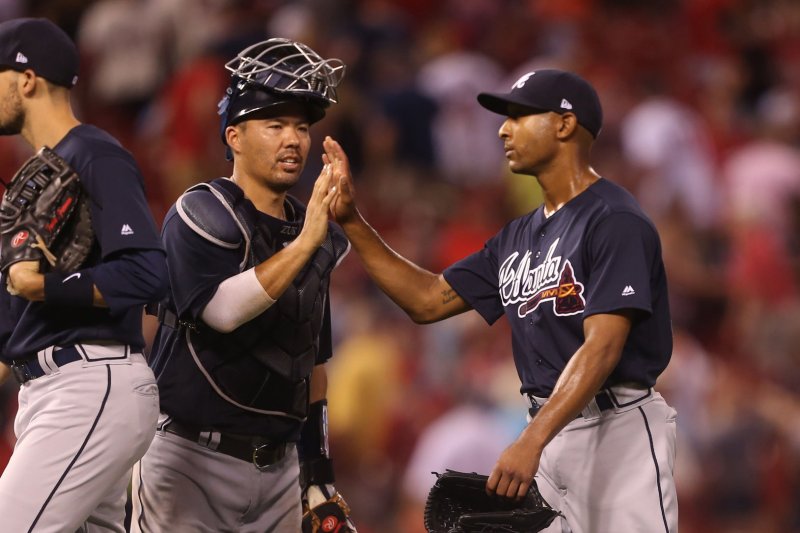 Atlanta Braves pitcher Sam Freeman and catcher Kurt Suzuki celebrate the third out and a 11-4 win over the St. Louis Cardinals on June 30 at Busch Stadium in St. Louis. Photo by Bill Greenblatt/UPI | License Photo

ATLANTA -- The Atlanta Braves' two-game home interleague series against the Toronto Blue Jays starting Tuesday night is the only time they face a team with a losing record in an 18-game stretch before and after the All-Star break.

The Braves, though, have stumbled at times against teams with inferior records, including losing two of three against the Baltimore Orioles and the Cincinnati Reds before heading out on a difficult 10-game road trip that didn't end as they had hoped.

Atlanta (50-38) swept a three-game series at St. Louis and won the first game in New York but lost the next two games against the Yankees and dropped three of four in Milwaukee for a 5-5 trip.

The Braves, fighting for first place in the National League East, need a solid start from Teheran after giving up 37 runs in the final six games of the road trip.

"We're going through a little rut with them right now," Braves manager Brian Snitker said of his starters after Sunday's 10-3 loss in Milwaukee. "We're going to have to keep fighting, because the reason we're right here where we are (in the NL East race) is because our starting pitching has been so good before this rough spot."

The Blue Jays (41-48) split a two-game series with Atlanta in Toronto in mid-June and have an 8-4 record in interleague play this year compared with 6-7 for the Braves.

Teheran and Stroman were matched in Atlanta last year, with the Blue Jays bashing three early homers in a 9-0 victory that was their only win in the four-game series.

Teheran, who gave up all the runs in three innings, has a 10.00 ERA in four career starts against the Blue Jays and is 6-12 with a 5.51 ERA in interleague games overall, struggling to an 8.05 ERA in his past 11 outings against the American League East.

Stroman blanked the Braves for 5 2/3 innings last season in his only career start against them. He is 8-3 with a 2.64 ERA all time against the NL.

Stroman and Teheran have had stints on the disabled list and mixed results since returning.

Stroman had two encouraging outings, including his first victory, but then his control issues returned during a dreadful inning in a loss to the New York Mets.

"My body feels great, my shoulder feels good. That honestly was the bigger concern," Stroman told reporters after losing to the Mets. "Just frustrating going out there when I know that I can be better than that and when I don't execute like I should, or I am capable of."

Teheran has had two good outings and two disappointing starts since his return, including giving up two homers and walking four in five innings during the loss last week to the Yankees.

Teheran said he wasn't feeling well at the end of that outing and the Braves sent him back to Atlanta to rest rather than go with the team to Milwaukee.

Snitker pulled center fielder Ender Inciarte out of the series finale against the Braves for not hustling.

"I've talked to him about it before," the manager said. "You don't run, you hurt the team and you have to come out of the game. We're playing for first place. We have to get at it."

Inciarte said, "He did what he had to do. He's got to set an example and start somewhere. If I've got to be the guy to be pulled from the game to show what we have to do, I'm OK with it."

The Braves have a 24-22 edge against the Blue Jays in interleague play, but Toronto holds the real bragging rights, defeating Atlanta in the 1992 World Series.