Orioles look to even series with Mariners

Kevin Gausman and the Baltimore Orioles takes on the Seattle Mariners on Tuesday. Photo by David Tulis/UPI | License Photo

BALTIMORE -- The Seattle Mariners manufactured runs the way they've done many times all season in Monday's 5-3 victory over the Baltimore Orioles. Now, the Mariners will try and do it again on Tuesday in the second game of a four-game series at Camden Yards.

Seattle drew a season-high 10 walks in the win on Monday, and five of them helped lead to four runs. Manager Scott Servais liked how his team kept finding ways to put runners on base and cause problems.

"We had a lot of traffic," Servais said. "We had the opportunities to score a few more runs -- but we'll take it."

Paxton has allowed 10 earned runs and three homers in his last two starts. He'll try to rebound from that in his third career start against the Orioles -- the left-hander has a 1-0 record with a 4.50 ERA versus Baltimore.

Gausman will try to snap a four-game losing streak. The right-hander has not won in his last seven starts despite pitching effectively in several of them.

However, the Orioles have not always given him a lot of offensive support. He is 1-2 with a 3.04 career ERA versus Seattle.

The Mariners got back shortstop Jean Segura Monday after missing four games due to an infection in his arm.

Segura went 0-for-3 in the series opener Monday but made two great defensive plays while Baltimore scored twice in the sixth inning. The Orioles could have scored one or two more, which would have turned the game around.

Catcher Mike Zunino did not play on Monday due to a sore thumb but Servais said he'd return to the lineup for Tuesday's game.

Servais also said the Mariners can't overlook the Orioles despite the team's struggles in the first three months.

"They've got power up and down the lineup," he said. "They've started to heat up a little bit. You've got to make pitches, you got to keep them off-balance."

However, the Orioles may have run into another problem when starter Dylan Bundy, who's been their top pitcher this season, rolled his ankle while running the bases in last weekend's series with Atlanta.

Manager Buck Showalter said there's a chance that Bundy will not make his scheduled start in the final game of this series on Thursday. There also is a chance Bundy could go on to the disabled list.

"He's still scheduled to pitch on Thursday, but it's something we're going to have to see and prepare for ... in case he can't," Showalter told reporters Monday.

Showalter also said Bundy could wind up on the 10-day disabled list. If so, the Orioles would need to do that by Tuesday so they could make it retroactive to Sunday and have Bundy back on the roster faster.

MLB // 19 hours ago
Rosario, Braves walk-off vs. Dodgers to take 2-0 lead in NLCS
Oct. 18 (UPI) -- Atlanta outfielder Eddie Rosario hit a single off the glove of shortstop Corey Seager to give the Braves a dramatic walk-off win over the Los Angeles Dodgers in Game 2 of the NLCS Sunday on night. 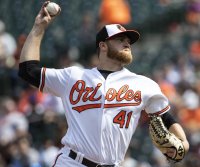 MLB // 6 days ago
Late Freddie Freeman homer lifts Braves over Brewers, into 2nd straight NLCS
Oct. 12 (UPI) -- The Atlanta Braves advanced to the NL Championship Series for the second year in a row after Freddie Freeman hammered an improbable, tiebreaking home run to clinch a 5-4 comeback win over the Milwaukee Brewers.
Advertisement