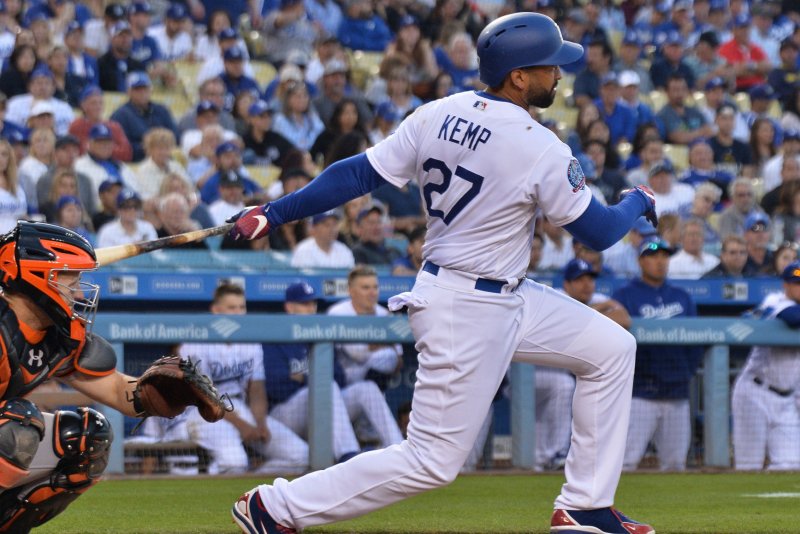 Kemp and Chirinos smacked into each other in the third inning of the Dodgers' 3-2 win Wednesday at Dodger Stadium in Los Angeles. The Dodgers led the Rangers 2-1 entering the bottom of the frame.

Chris Taylor began the inning by grounding out for the Dodgers. Justin Turner had the same fate in the next at-bat of the inning. Kemp followed the two outs by singling on a ground ball to the shortstop.

He then reached second base on a throwing error.

Enrique Hernandez settled in for the fourth at-bat of the inning for the Dodgers. The center fielder smacked a 1-2 fastball from Cole Hamels into right field for a single. Kemp hustled around third base and eyed the Dodgers' third run.

But Chrinos wasn't having it. The Rangers catcher snagged a throw from right fielder Nomar Mazara and stood between the plate and a charging Kemp.

The Dodgers star lowered his shoulder and plowed over the catcher. But Chirinos hung onto the ball for the out. Both players fell to the ground. Kemp got up and brushed the catcher, prompting a retaliatory push from the backstop. The two players exchanged more pushes before both benches cleared for a scuffle in front of home.

Texas tied the game with RBI singles from Jurickson Profar and Joey Gallo in the top of the fourth inning. The Dodgers won in the bottom of the 11th inning when Austin Barnes reached first base on a force attempt. Pitcher Matt Bush had a throwing error on the play and Hernandez came in to score the winning run from third base.

Hernandez made a slick play for the walk-off run. Bush's throw to home was off line, enabling Hernandez to dance around the catcher's tag and slip his fingers on the bag.