May 28 (UPI) -- Left fielder Corey Dickerson robbed a home run from Kyle Schwarber Monday in the Pittsburgh Pirates' 7-0 loss to the Chicago Cubs.

Dickerson pulled off the snare in the top of the second inning at PNC Park in Pittsburgh. Schwarber was at the plate facing Pirates starter Chad Kuhl. The right-handed hurler allowed a solo home run to Anthony Rizzo at the beginning of the inning, before striking out Javier Baez.

Schwarber took a called strike before taking a 95.8-mph fastball for a ball. Kuhl then tossed in a 90.8-mph changeup. Schwarber hacked at the offering, sending it deep to left field, just right of the foul pole.

Dickerson hovered over to the area before perfectly timing his leap. He showed off an impressive vertical, jumping nearly straight up and snatching the baseball out of the air as it was flying several feet above the outfield fence.

Kuhl gave Dickerson a round of applause after the effort. The Pirates pitcher escaped the inning without allowing another run.

Dickerson went 1-for-3 at the plate and is hitting .311 on the season. Schwarber went 0-for-3 with a walk and a strikeout in the victory.

The Pirates had just two hits in the loss. 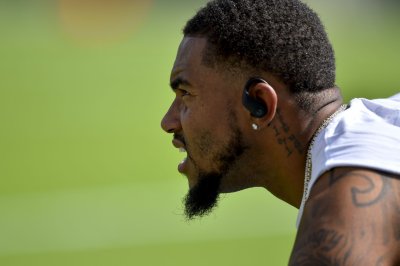