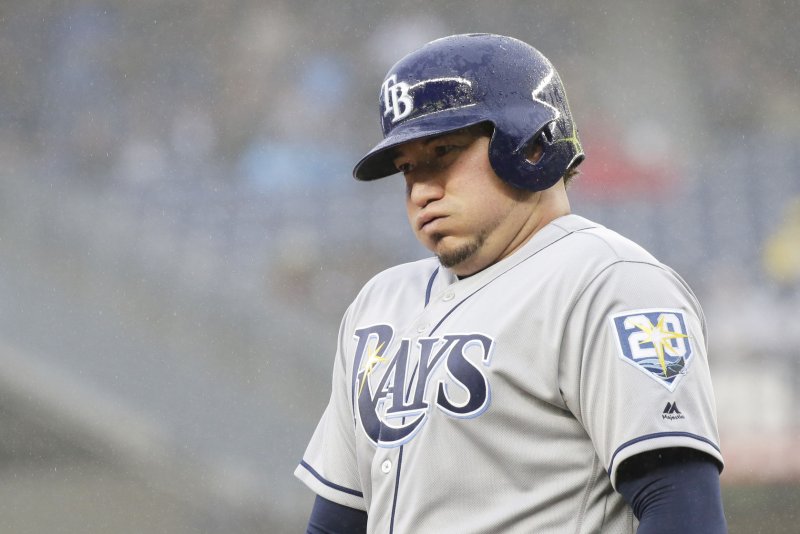 Tampa Bay Rays' Jesus Sucre reacts as he stands on third base in the third inning against New York Yankees in the Yankees home opener on April 3 at Yankee Stadium in New York City. Photo by John Angelillo/UPI | License Photo

The Tampa Bay Rays get back to having a traditional starting pitcher on the mound, but they'll do so Tuesday night against the best hitting lineup in the majors as the Boston Red Sox come to town.

Boston (32-15) went into Monday night's games just percentage points behind the Yankees for the American League East lead, with the best team batting average (.270) and the most home runs (68) in all of baseball.

Red Sox sluggers Mookie Betts and J.D. Martinez are tied for the major league lead with 15 home runs each, becoming the first pair of Boston players ever to both get to 15 home runs in the first 50 games of the season.

"The two guys I thought were at that pace, they never did it: Manny and David," said Red Sox manager Alex Cora, referring to Manny Ramirez and David Ortiz. "It's fun to watch."

The Rays are surprisingly within a game of .500 at 22-23, and they've done so despite enough injuries to their starting rotation that they've tried all kinds of innovations to traditional pitching approaches. Reliever Sergio Romo started each of the last two games -- this after 588 relief appearances to open his career -- and pitched well, getting three outs Saturday and four on Sunday without allowing a run or a hit.

What was expected to be a grueling 11-game, 10-day road trip turned out to be a 7-4 swing for the Rays, who won six straight before Sunday's loss to the Angels.

"We have to carry the momentum a little bit," manager Kevin Cash said. "The off day comes (Monday), hopefully that doesn't slow us down. Get excited, get back to the Trop. We've played tight ballgames against Boston. We have to find how to win those tight ballgames."

Boston is 7-3 against Tampa Bay this season, and six of those seven wins have come by a single run. The two teams won't play again after this series until August, when they wrap up the season series with three games at Fenway and three at Tropicana Field.

On Tuesday, the Rays will have to contend with Red Sox ace Chris Sale (4-1, 2.29 ERA), who pitched a hard-luck gem against Tampa Bay on opening day, allowing one hit in six scoreless innings of what ended up a 6-4 Rays victory.

The Rays are back to a traditional starter they can expect to make it out of the second inning, though Jake Faria (3-2, 5.20) wasn't able to do that the last time he faced the Red Sox. In April, he lasted just 1 2/3 innings, giving up eight earned runs on five hits and five walks, so his season ERA against Boston is still 14.29; for his career, it's 6.14.

His last outing, Faria lasted only 4 1/3 innings, giving up three runs on four hits with four walks, so control remains a focal point as he tries to get back to the dominant pitching he opened his major league career with last season.

MLB // 1 day ago
Monday's Twins-Athletics game postponed due to COVID-19 issues
April 18 (UPI) -- MLB has postponed Monday's game between the Minnesota Twins and Oakland Athletics at Oakland Coliseum to allow the Twins organization to conduct testing and contact tracing for COVID-19.