The Marlins won the first game of the series 2-0 on Friday. Dan Straily pitched seven scoreless innings, allowed only three hits and retired the final 11 batters he faced. It was only the second time this season that Atlanta, the top-scoring team in the National League, has been shut out.

Urena did not pitch poorly last week, but Newcomb won the day in their first meeting. Urena allowed three runs in six innings, but Newcomb threw six shutout innings and allowed only one hit.

Newcomb will bring a 20-inning scoreless streak into the game. The stretch included seven scoreless innings against New York on May 2 and followed with six scoreless against Tampa Bay on May 8. In both games, he allowed only two hits. Newcomb has a 1.69 ERA over his last seven starts.

Newcomb had an extra day to prepare. Atlanta's Mike Siroka was scratched from his start Thursday and Max Fried was promoted to take his place. But when the game against the Cubs was rained out, the Braves shipped Fried back to the minors and promoted Matt Wisler from Triple-A Gwinett. Wisler made the start Friday night.

Urena is 2-4 with a 5.40 in 11 career appearances (eight starts) against the Braves. In 43 1/3 innings against Atlanta, Urena has struck out 28 and walked 19. In his last start against the Braves, Urena allowed three runs on four hits and two walks over six innings.

Since a shaky start to begin the season (5.88 ER in first five starts), Urena has pitched well. Over his last four starts, Urena hast posted a 2.84 ERA, even though the Marlins have yet to win any of his starts. The Marlins have lost 11 straight when Urena has started, dating back to Sept. 26, 2017.

"The season is not over yet," Urena said. "It just started. We're going to keep fighting."

Atlanta right fielder Nick Markakis broke out of an 0-for-8 slump by going 3-for-4 on Friday. Markakis raised his batting average to .343 and his 59 hits are the most in the National League.

Miami infielder Starlin Castro had two hits in the first game and has hit safely in his last four games against the Braves. Castro tied his career high with four hits Wednesday.

Miami's Brad Ziegler picked up his ninth career save against Atlanta on Friday. He has retired the first batter he's faced in 17 of 19 appearances this season. 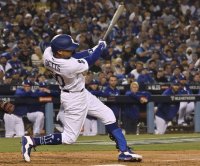