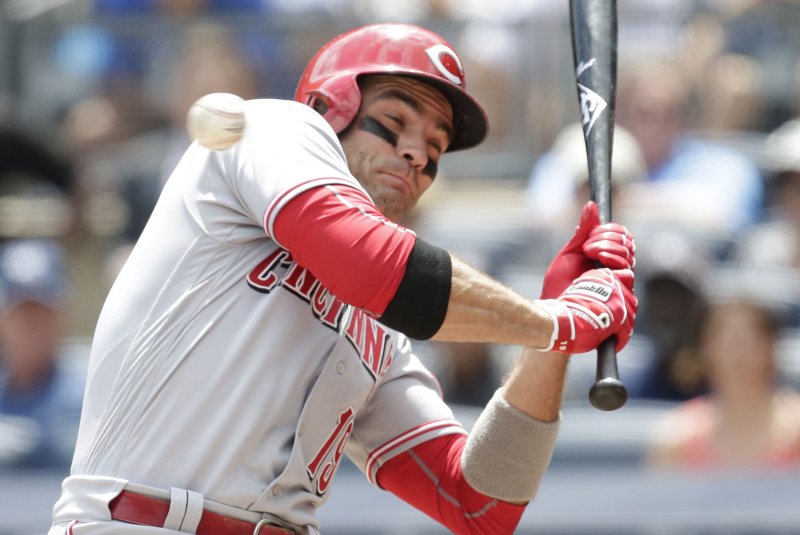 May 16 (UPI) -- Cincinnati Reds star and Canada native Joey Votto apologized Wednesday for negative comments he made about Canadian baseball.

The five-time All-Star was a guest on a Yahoo Sports podcast Tuesday when he made the comments. Votto was asked about fellow Canadian James Paxton throwing a no-hitter against the Toronto Blue Jays on May 8 at Rogers Centre in Toronto, Ontario.

"I don't care almost at all about Canadian baseball," Votto said on the podcast. "I wasn't raised inside of Canadian baseball really ... I'm coming up on half of my life being in the United States working and being supported by American baseball."

Votto later repeated that he didn't "care at all" about the fact that the Seattle Mariners pitcher threw the no-no on Canadian soil.

"As far as Toronto, and Canadian baseball, and the country of Canada, and [Paxton] being Canadian, I don't care at all," Votto said. "[Paxton], or the Jays, or Canada, in general, may disagree with that, but I really couldn't give a rats [expletive] about that."

The 2010 National League MVP walked back the comments with a post on the Canadian Baseball Network website.

"I was asked recently about James Paxton and his no-hitter on Canadian soil. I am not sure how I could have been so ridiculously selfish and short-sighted in my reply," Votto wrote.

Votto said the question took him back to the times when he had resentment for not making Team Canada in high school, not being drafted by the Toronto Blue Jays out of high school and not being picked for the Olympic team while in the minor leagues.

He said the comments came out of a side of jealousy for Paxton being celebrated in Toronto.

"It was an odd reply and one I am terribly ashamed of," Votto wrote.

Votto has won the Lou Marsh Award for Canada's Athlete of the Year twice. He has also won the Tip O'Neil award seven times. That award is given to a Canadian-born player every year by the Canadian Baseball Hall of Fame.

"As I write this I am saddened that I was so flagrant with my remarks and more importantly that I offended so many people that mean so much to me," Votto wrote.

“My comments came from a place of jealousy.”

-Joey Votto follows up on his controversial comments regarding Canadian baseball.

"To James Paxton, the Blue Jays, the Toronto fans, the women and men all across Canada that work so hard to promote and support Canadian baseball, I am sorry for my selfish comments and I humbly ask for your forgiveness."

Votto, 34, went to Richview Collegiate Institute in Toronto, before being selected by the Reds in the second round of the 2002 MLB June Amateur Draft. He has spent his entire 12-year Major League Baseball tenure in Cincinnati.