Indians square off with banged-up Tigers

The Detroit Tigers keep losing players, but they're hanging tough in the weak American League Central.

Playing without four regulars, Detroit defeated Cleveland 6-3 on Monday night to pull within two games of the Indians. They had lost their last 11 games to their division rival.

Injuries continue to force Tigers manager Ron Gardenhire to revamp his lineup and rotation. Third baseman Jeimer Candelario, who usually bats second in the order, was placed on the 10-day disabled list on Monday with left wrist tendinitis.

RELATED Struggling Darvish gets start for Cubs in Atlanta

Miguel Cabrera and leadoff hitter Leonys Martin were already on the disabled list with hamstring strains, and cleanup hitter Nicholas Castellanos has missed the last two games with a left pinky contusion after being struck by a pitch. Opening Day starter Jordan Zimmermann is also on the DL.

"We're just fighters and we're also big leaguers," outfielder JaCoby Jones said. "We're going to compete and scratch out some good at-bats, play good defense and just keep fighting to do whatever we can to win the game.

"When guys are out of the lineup like that, our top of the order guys, we have guys who step up. Hopefully, we can keep it up."

RELATED Mets, Jays both aiming to rebound from losses

"I'm sure these guys love the opportunity to play," Jones said. "We all want to play each and every day, so when they get the opportunity, they're going to do whatever they can to help the Tigers win some games."

The Indians' most notable injury is to center fielder Bradley Zimmer (chest), who has missed the last four games.

"Their bats are coming along and they have a great pitching staff, but I feel comfortable with our team," Jones said. "I feel good where we're at."

Josh Tomlin is Cleveland's scheduled starter on Tuesday, but his rotation spot is tenuous. He is 0-4 with an 8.06 ERA.

He hasn't pitched since May 4, when he got a no-decision up five runs (four earned) and eight hits in seven innings against the New York Yankees.

Tomlin's best outing of the season came against the Tigers on April 10 when he tossed five scoreless innings. The 33-year-old right-hander is 7-6 with a 4.87 ERA in 17 career outings against Detroit.

"I understand the aspect of, if you don't turn the corner, what could happen," Tomlin said to MLB.com after his most recent start. "But that never creeps in my mind when I'm on the field or off the field, or anything like that. It's out of my control. "Whatever decision they decide to make, my job is to take the ball whenever I'm told to pitch and go out there and give my team a chance to win."

Another veteran left-hander Francisco Liriano (3-1, 3.35 ERA), gets the nod for the Tigers. Liriano was battling an illness and only pitched four innings in his last start on May 9 in Texas. He gave up three runs and four hits that night.

His only loss this season came against the Indians, but it was a quality start. He gave up two runs and three hits in six innings on April 9 in a 2-0 loss. He's 5-7 with a 4.11 ERA in 21 career outings against Cleveland. 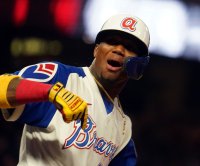