“It is a beautiful day. Give @FortniteGame a break and play outside.”

May 10 (UPI) -- The Fortnite addiction has official taken over professional sports and the Milwaukee Brewers have taken it to another level.

Brewers players sat down to play the game Tuesday on the jumbotron at Miller Park in Milwaukee, Wisc. The Brew Crew's Josh Hader, Jeremy Jeffress, Brett Phillips and Dan Jennings sat in some seats along the third base line and looked up at the scoreboard in center field for the gaming session.

"It is a beautiful day," the Brewers tweeted, along with a video of the players battling. "Give @FortniteGame a break and play outside. How about a compromise?"

"When Mom tells you to turn off @fortnite and go play outside," the Brewers wrote on Instagram.

The players participated in the Battle Royale on PS4 before beat the Cleveland Indians 3-2. Cleveland beat Milwaukee 6-2 on Wednesday. The Brewers battle the Colorado Rockies in the first bout of a four-game series at 8:40 p.m. Thursday at Coors Field in Denver, Colo.

"Out here living my best life playing @fortnite on the Jumbotron," Phillips wrote on an Instagram photo of himself playing the game at the ballpark.

Out here living my best life playing @fortnite on the Jumbotron 🎮

The Fortnite craze has overwhelmed the world of sports in a similar manner to the way the storm envelops characters in the game itself. Athletes from around the world are stealing dance moves from the game to celebrate home runs, goals and even jump shots. 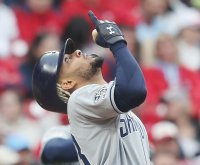