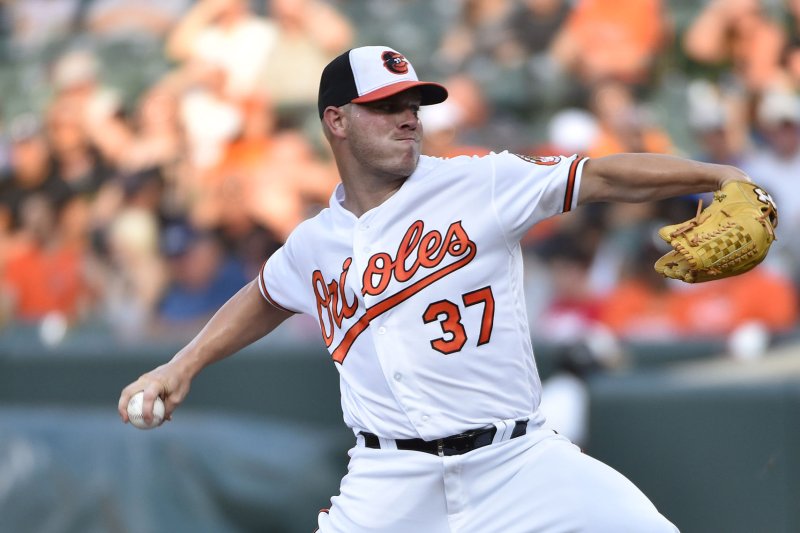 May 9 (UPI) -- Baltimore Orioles starter Dylan Bundy allowed four home runs and seven runs total before getting an out against the Kansas City Royals.

The right-handed hurler had the awful appearance in the Orioles' 15-7 loss Tuesday at Oriole Park at Camden Yards in Baltimore, Md. Bundy is now 1-5 on this season, with a 5.31 ERA.

The Orioles' starter was yanked after 28 pitches, while Royals starter Danny Duffy lasted 101 throws. Duffy earned his first win of the season, allowing six hits and one run over 5.1 innings.

Duffy's dangerous night began with a Jon Jay single in his first exchange with the Royals hitters.

RELATED Struggling Nick Pivetta gets start for Phillies vs. Giants

The @Royals came to play. 😱😱 pic.twitter.com/k6tBRh7qyj

Catcher Salvador Perez mashed a third consecutive Royals homer in the next at-bat. That time, Perez belted a 90.5-mph fastball for a 409-foot solo shot to center field.

Bundy walked two consecutive hitters in between two mound visits. He then surrendered a three-run bomb to Alex Gordon, before being taken out for Mike Wright Jr.

"It was awesome, a lot of fun," Moustakas told reporters. "Once we got back around the order to the top of the order ... I don't think I've ever been around something like that before."

The Royals smacked five hits and scored three runs with Wright on the hill. In total, Kansas City had 14 plate appearances in the inning. The Royals led 10-0 following the first inning hit fiesta. They totaled 20 hits in the win, while the Orioles had a respectable 14 hits in the loss.