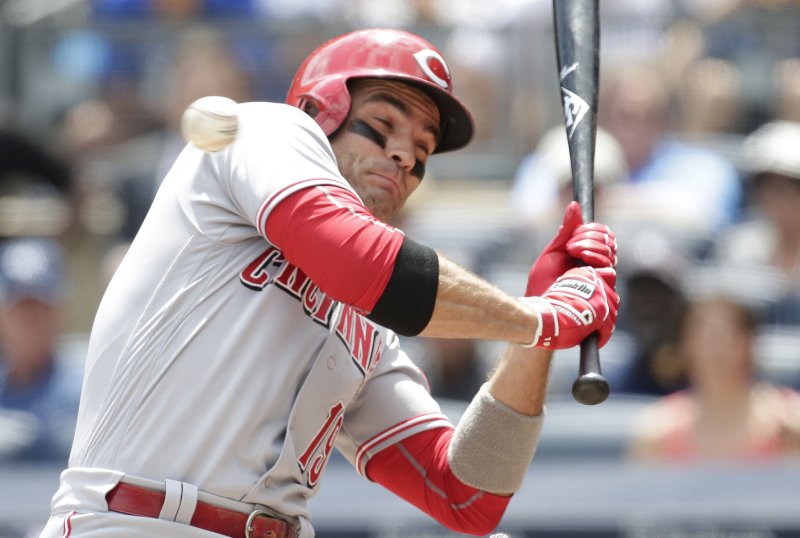 Joey Votto and the Cincinnati Reds take on the St. Louis Cardinals on Friday. Photo by John Angelillo/UPI | License Photo

With the Cincinnati Reds off to a terrible start amid whispers that his job could be in jeopardy, manager Bryan Price made an unusual move. He sat down his best player.

First baseman Joey Votto, whose streak of 202 consecutive games started included all 162 last season, got the night off Thursday as the Reds lost 13-4 to the St. Louis Cardinals in the opener of a four-game series at Great American Ball Park.

If nothing else, the move proved that if Price is worried about his job being in danger, he's not showing it despite a troubling 2-10 start and five consecutive losses by a team coming off three consecutive seasons of at least 94 losses.

Votto's streak was the longest by a Reds player since Pete Rose started 370 consecutive games from 1973 to 1976.

RELATED Orioles next up for hot Red Sox

"Just a day off," Price said. "We talked about it in spring training. There's certainly a point in time where we've got to look at some scheduled days off. I talked to him about it and decided this would be a good one. ... He plays a lot. I'm trying to be smart and keep him healthy and feeling great throughout the season."

Cincinnati's problem is it doesn't have another Votto or two to insert into a lineup that keeps coming up short offensively, in part because the pitching simply isn't getting the job done.

Five of the Reds' seven pitchers were scored upon, including Zack Weiss, who didn't retire a batter in his major league debut while yielding two homers and four runs in a seven-run seventh. Infielder Cliff Pennington pitched the ninth inning.

Jose Martinez homered while going 4-for-5 and driving in six runs, and Yadier Molina added a tape-measure home run off Weiss.

Michael Wacha (2-1) improved to 9-1 against Cincinnati despite giving up four runs (three earned) in five innings.

"We know when this offense is going, it can be as good as any offense in the league," Cardinals manager Mike Matheny said. "Guys kept taking great at-bats."

Votto sitting out a game had nothing to do with all that.

Weaver has allowed only two earned runs in 11 1/3 innings in his two starts, although he took the loss Sunday despite yielding only one earned run and striking out seven in 6 1/3 innings of a 4-1 loss to the Arizona Diamondbacks.

"Weaver was so good," Matheny said. "It's a shame we couldn't get out of there with a win for him."

Weaver has only 15 major league decisions to date -- he's 9-6 -- but he has beaten the Reds twice while pitching 11 2/3 innings against them in three appearances, including two starts. Scooter Gennett (2-for-5, .400) is the only current Cincinnati player with multiple hits against him.

Mahle has made one strong start and one poor one this season. He beat the Chicago Cubs 1-0 on April 2 while giving up only one hit in six shutout innings but lost to the Pittsburgh Pirates 5-0 on Sunday, allowing all five runs and nine hits -- including two home runs -- in 4 2/3 innings.

Mahle won his only career start to date against the Cardinals, beating them 6-0 on Sept. 13, giving up four hits in five shutout innings. Martinez went 2-for-3 against him.

The Reds currently list left-hander Cody Reed as their starter for Saturday, but left-hander Brandon Finnegan (left biceps strain) is expected to be activated off the 10-day disabled list to start. He made a rehabilitation start for Triple-A Louisville on Monday.