HOUSTON -- From the moment he waived his no-trade clause and accepted relocation to Houston, Astros right-hander Justin Verlander was deemed a franchise savior, an ace capable of leading his new club to the promised land of its first World Series championship.

On Friday night at Minute Maid Park, the Astros will hand Verlander the ball with their postseason lives hanging in the balance. Following three consecutive road losses to the New York Yankees, the Astros return home for Game 6 of the American League Championship Series on the brink of elimination and with Verlander standing in the gap.

This seemed an unlikely scenario when Verlander delivered a complete-game gem in Game 2 last Saturday, allowing one run on five hits and one walk with 13 strikeouts in a tense 2-1 victory. Yet now, with its offense scuffling, Houston needs Verlander to be great once more.

"Obviously, I know this is one of the main reasons I was brought here," Verlander said. "I think so far I've done what they've asked or what they've needed of me to help the rotation and help get deep in the playoffs.

"This is obviously the biggest game for the Astros up to this point for this season. The expectations are there. My teammates, I'm sure, are expecting a lot of me. And I expect a lot of myself. So, this is why we play the game. And I love these opportunities to pitch in these atmospheres, these type of games. It should be a lot of fun."

While the Astros' collapse from a 2-0 series lead has been twofold, with both the bullpen and offense playing a significant role in the drastic swing in momentum, the sudden inability of the lineup to generate runs represents the most dramatic and puzzling development for Houston.

RELATED ALCS Game 5 preview: Houston Astros look to Dallas Keuchel to get back on track

The bullpen drew ire after blowing a four-run lead with nine outs left in Game 4 and on the brink of a 3-1 series lead with Dallas Keuchel up next in the rotation, but the Astros' offense has been consistently inept throughout, even during victories in Games 1 and 2.

"We're obviously going to have a game plan going against a pitcher," Astros manager A.J. Hinch said. "If we can stay disciplined in that game plan, all the better. But the pitcher has to adapt to us, as well.

"(Wednesday) is a good example. (Yankees starter Masahiro Tanaka) pitched us differently in Game 5 than he did in Game 1. He did expand the strike zone. We chased it a little bit.

"But for us it's trying to find the pitch to hit, and that's about it. If he doesn't give it to you, the game will tell you to take a little bit more. Easier said than done. If this offense is as good as it's been for this season, we are one good stretch from getting back to where we need to be."

New York right-hander Luis Severino will get the start with the Yankees one victory away from claiming their first AL pennant since 2009. Severino lasted four innings and allowed one run working opposite of Verlander in Game 2, departing early after taking a sharply hit ground ball off his left wrist that same inning.

Severino was miffed at Yankees manager Joe Girardi for pulling him despite being physically able to continue. He will get another chance to pitch deeper into the game with equal effectiveness.

The Yankees' resilience has been the story of this postseason. New York staved off three elimination games against the top-seeded Cleveland Indians in the AL Division Series, winning the finale on the road at Progressive Field. After Keuchel and Verlander produced brilliant starts in succession for the Astros to open the ALCS, the Yankees fought back once the series shifted to the Bronx.

And now, for a second consecutive round, the Yankees can eliminate a higher-seeded opponent on the road. Their pitching has been superior, their hitting has been clutch, and the Yankees not only have the Astros backed into the ropes, but they have momentum on their side. 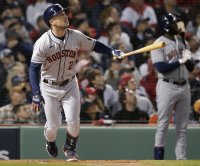 MLB // 5 days ago
Cody Bellinger, Dodgers rally for 6-5 win over Braves in Game 3 of NLCS
Oct. 19 (UPI) -- Behind stars Cody Bellinger and Mookie Betts, the Los Angeles Dodgers stormed back to beat the Atlanta Braves 6-5 in Tuesday's Game 3 of the National League Championship Series at Dodger Stadium.
Advertisement