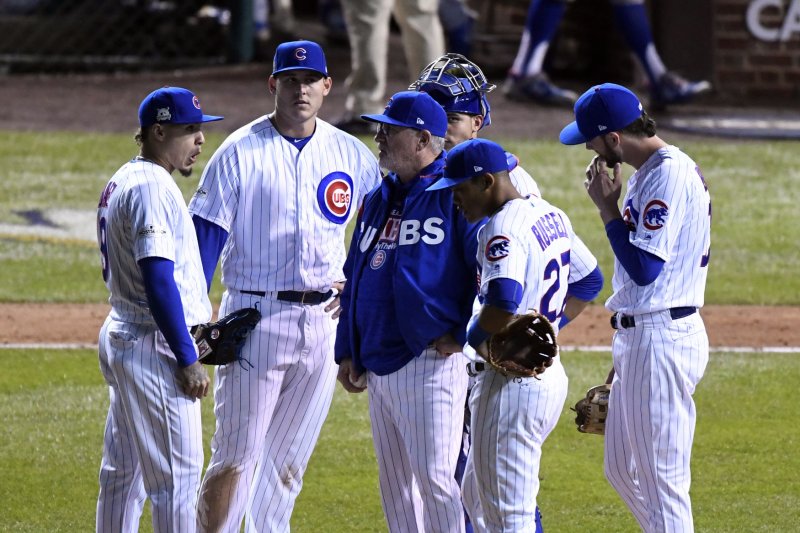 Chicago Cubs manager Joe Maddon (C) talks to his team during a pitching change in the eighth inning of game 3 of the NLCS against the Los Angeles Dodgers at Wrigley Field on October 17, 2017 in Chicago. Photo by Brian Kersey/UPI | License Photo

CHICAGO -- The Chicago Cubs have a history of coming from behind when their season is on the line.

If the Cubs -- who erased a three-games-to-one deficit in the 2016 World Series to capture their first championship since 1908 -- are to return to the Fall Classic, they will have to pull off a comeback achieved just once in baseball history.

A 6-1 loss to the Los Angeles Dodgers in Game 3 of the National League Championship Series on Tuesday night put the Cubs within a loss of being eliminated. The Dodgers are just a victory away from their first World Series appearance since 1988 heading into Game 4 at Wrigley Field on Wednesday, but the Cubs' recent history of comebacks provides them with confidence they can do it again.

Even so, they also realize they are running out of time.

"We are down, but we're not out -- we have a pulse," Cubs third baseman Kris Bryant said after the Tuesday loss. "As the saying goes, we really need to take it one game at a time. Now, we've got to win them all."

The Boston Red Sox pulled off the only escape from a 3-0 postseason deficit, beating the New York Yankees in the 2004 American League Championship Series.

The Cubs again struggled to score runs on Tuesday night when they couldn't manage anything more than Kyle Schwarber's first-inning solo home run. Now, with their season on the line, they will hope their bats can catch fire while Jake Arrieta takes the mound looking to extend the series to a fifth game on Thursday at Wrigley Field.

Arrieta is just 1-3 with a 3.77 ERA in five career starts against the Dodgers, who beat him in his only start against Los Angeles this season. But given the dire reality of the must-win game, Arrieta knows how much a solid outing on Wednesday could do for the Cubs' chances.

Arrieta, a free agent at season's end who could be making his final start for the Cubs on Wednesday, said the feeling in the clubhouse remains upbeat despite the series deficit.

"The mood is really very similar to the way it is in our clubhouse every day," Arrieta said before the Game 3 loss. "You know, we really don't ever expect that to change."

Said Cubs shortstop Addison Russell: "We've got nothing to lose -- we just have to go out and play our hearts out."

The Dodgers will counter with Rich Hill, who hadn't made a career start against the Cubs before last week. The left-hander pitched five innings in Los Angeles' Game 2 win, surrendering just three hits and one run while striking out eight and walking one.

With another strong showing by Hill and continued dominance by the Los Angeles bullpen, the Dodgers would carry a seven-game unbeaten streak into the World Series.

The Cubs, meanwhile, would be swept in the NLCS for the second time in three years after the New York Mets won four straight games against Chicago in 2015.

"(We're) just getting after it tomorrow," Dodgers left fielder Andre Ethier said Tuesday night. "(We have to) come back with the same intensity, embrace all the emotion, embrace all the energy that is flying around this ballpark, on the team, and get the job done.

"Like I said, you can't give opportunities and too much open space for a team like the Cubs to get back in it. So tomorrow's the most important game. We've got to figure out a way to close it out tomorrow."