By
Joe Haakenson, The Sports Xchange 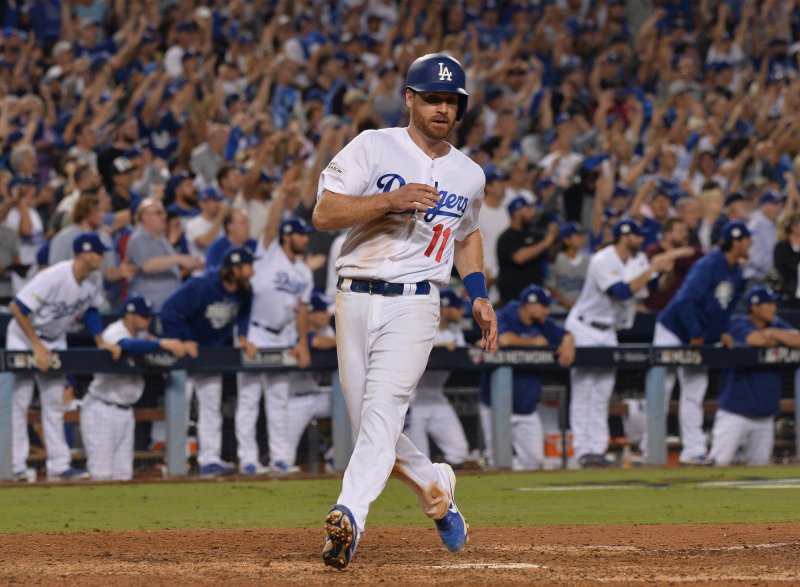 The Los Angeles Dodgers' Logan Forsythe scores on teammate Chris Taylor's bases-loaded single in the seventh inning against the Arizona Diamondbacks during Game 2 of the NLDS on Saturday. Photo by Jim Ruymen/UPI | License Photo

After all, nearly everything Roberts has done in the first two games of the National League Division Series against the Arizona Diamondbacks has turned to gold.

Whether it's writing out a lineup card or managing the game, Roberts' intuition has been spot-on, at least so far, as the Dodgers took a 2-0 lead in the best-of-five series with an 8-5 victory Saturday night at Dodger Stadium.

Logan Forsythe, getting the start at second base over Chase Utley for the second night in a row, had three hits, scored two runs, drove in one and stole a base, part of an offensive onslaught by Los Angeles that followed a nine-run effort in Game 1.

Catcher Austin Barnes also had a big night, getting a start in place of regular catcher Yasmani Grandal. Barnes had two hits, scored two runs scored, drove in two and stole a base. His two-run double was the key hit in a four-run fifth inning that turned a 3-2 edge into a 7-2 cushion.

It turned out that the cushion came in handy, thanks to a three-run pinch-hit home run in the seventh inning by Arizona's Brandon Drury that silenced -- at least momentarily -- a blue towel-waving sellout crowd.

Dodgers right fielder Yasiel Puig, hitting in the No. 8 spot, had another productive performance with three hits and two RBIs.

Despite all the offense -- the Dodgers had 12 hits in all -- it came down to pitching in the end, and closer Kenley Jansen got the job done with a five-out save.

Jansen entered the game with one on and one out in the eighth inning, and retired all five hitters he faced to finish it off.

Both starting pitchers were an afterthought by the time the game was over, as neither lasted five innings. Dodgers starter Rich Hill went four innings and gave up two runs on four hits and three walks, both runs coming on Paul Goldschmidt's first-inning homer.

Diamondbacks starter Robbie Ray, who dominated the Dodgers during the regular season (3-0, 2.27 ERA in five starts), gave up four runs on four hits and four walks in 4 1/3 innings.

Kenta Maeda, one of six Los Angeles relievers to follow Hill, got the win over Ray.

Arizona took a 2-0 first-inning lead against Hill. After A.J. Pollock walked with one out, Goldschmidt crushed an 89 mph fastball that Hill left up and over the middle of the plate, hitting it an estimated 430 feet into the left-field bullpen.

The Dodgers got one run back against Ray in the bottom of the second inning without the benefit of a hit. Enrique Hernandez led off with a walk and Barnes walked one out later.

The runners moved to second and third on a wild pitch before Puig drove in Hernandez with a groundout to third, cutting the Diamondbacks' lead to 2-1.

The Dodgers scored twice more in the fourth to take a 3-2 lead. With one out, Forsythe, Barnes and Puig each singled to load the bases. Roberts sent in backup catcher Kyle Farmer to pinch hit for Hill and he struck out.

But during the at-bat, Ray threw a wild pitch, allowing Forsythe to score from third to tie the score at 2. Chris Taylor followed with an infield single, scoring Barnes to give the Dodgers their first lead of the night.

In the fifth, the Dodgers knocked Ray out of the game and put up four more runs for a 7-2 lead, the big hit of the inning a two-run double by Barnes, who hit an 0-2 breaking ball from Arizona reliever Jimmie Sherfy into the left field corner.

Forsythe and Puig each contributed an RBI single in the inning.

NOTES: Both the Dodgers and Diamondbacks altered their lineups from Game 1 on Friday. For the Dodgers, Kike Hernandez replaced Curtis Granderson in left field and Austin Barnes replaced Yasmani Grandal at catcher. For the Diamondbacks, Daniel Descalso replaced Brandon Drury at second base, Chris Iannetta replaced Jeff Mathis at catcher and Jake Lamb replaced Adam Rosales at third base. ... RHP Yu Darvish will start Game 3 for the Dodgers on Monday in Arizona. He made two postseason starts for Texas -- one in 2012 against Baltimore and one in 2016 against Toronto -- losing both games. ... RHP Zack Greinke's Game 3 start for Arizona will be his 11th career postseason start. Six of those came while a member of the Dodgers, pitching in the 2013, '14 and '15 playoffs. Including his start in the wild-card game against Colorado on Wednesday, Greinke is 3-3 with a 3.92 ERA in 10 postseason starts.