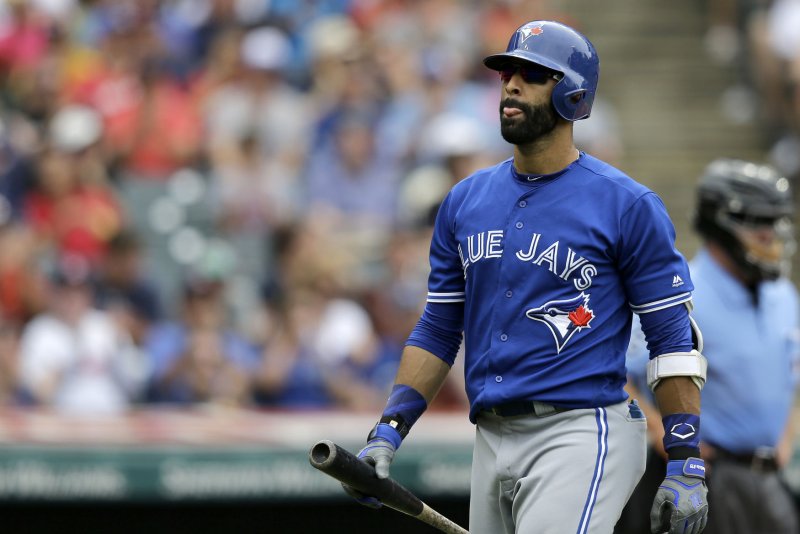 Toronto Blue Jays Jose Bautista strikes out during the eight inning of a game against the Cleveland Indians at Progressive Field in Cleveland, Ohio on July 23, 2017. Photo by Aaron Josefczyk/UPI | License Photo

TORONTO -- Right fielder Jose Bautista might have played his last home game with the Toronto Blue Jays on Sunday.

If Bautista did, he did it right and so did the Blue Jays and their fans.

Receiving ovations with each at-bat, Bautista had two singles, a walk and an RBI to help the Blue Jays defeat the New York Yankees 9-5 in the rubber match of the three-game series.

"It was an exciting, the last home game and the focus on Jose," Blue Jays manager John Gibbons said. "He helped rebuild the team, he was the face of the franchise for a number of years."

Bautista was supported by Russell Martin's two doubles and three RBIs, and Teoscar Hernandez, who homered for the third straight game.

The Blue Jays (73-83) finish their season with six road games.

Aaron Judge hit his league-leading 47th and 48th homers and had three RBIs for the Yankees (86-67).

Bautista took right field alone just before the game started as his teammates applauded from the dugout and the crowd gave a standing ovation. He was unaware that his teammates would not follow him on the field right away.

"We just decided that it was probably better if he just took the field alone to give him the credit that he deserved," center fielder Kevin Pillar said. "He's been a huge part of this franchise for a long time. Obviously with his future being uncertain we wanted him to go out in Jose fashion."

With one out in the ninth, Ezequiel Carrera replaced Bautista in right field. Bautista left the field to a standing ovation, hugged some teammates along the way and then returned from the dugout for a curtain call.

"I don't think he was aware of (the plan to substitute him in the ninth)," Gibbons said. "I know he appreciated it, I'm sure. He got a great ovation. The fans took care of him all day long as they should have."

"A lot of good emotions," Bautista said. "It's good to be recognized and it's good to feel the love and I appreciate everything that happened today. It is a possibility that I may not be back. Those decisions will be made and we'll see what happens."

The Yankees have clinched a wild-card spot, but their chances of winning the American League East are fading. "It's getting fairly large with seven games to go," Girardi said. "Obviously we're going to keep playing but I think you have to start to think ahead a little bit, too. It's frustrating because we've played really well the last six weeks.'

"If it happens it happens, if it doesn't then we'll figure out the wild-card thing," Yankees designated hitter Chase Headley said. "You couldn't really ask for us to play any better than we have at this month. Unfortunately, Boston got hot at the same time."

Hernandez led off the bottom of the first with his fifth homer of the season and the first of his career leading off a game.

The Blue Jays scored again in the second on Darwin Barney's sacrifice fly that scored Pillar, who doubled and stole third.

Justin Smoak doubled with one out in the third, and Bautista and Kendrys Morales walked to load the bases. Jonathan Holder, who replaced Garcia, got a foul out to third before yielding Martin's bases-clearing hit to right center.

The Yankees scored in the fourth. Headley and Judge walked before Didi Gregorius hit an RBI single.

The Blue Jays scored four runs in the fourth against Bryan Mitchell. Josh Donaldson and Bautista had RBI singles and Morales had aa two-run single with Bautista being thrown out at home in a close play as he tried to score from first on the hit.

Judge led off the sixth with a homer. Stroman retired the next two batters on grounders before giving up a double to Jacoby Ellsbury and walking Todd Frazier.

Matt Dermody replaced Stroman and gave up an RBI double to Greg Bird before Ryan Tepera ended the inning on Austin Romine's grounder to third.

Tepera allowed a one-out single to Headley and Judge's second homer of the game and was replaced by Aaron Loup, who pitched around a single with two strikeouts to end the inning.

Toronto's Tom Koehler pitched a perfect eighth. Roberto Osuna struck out the side in the ninth.