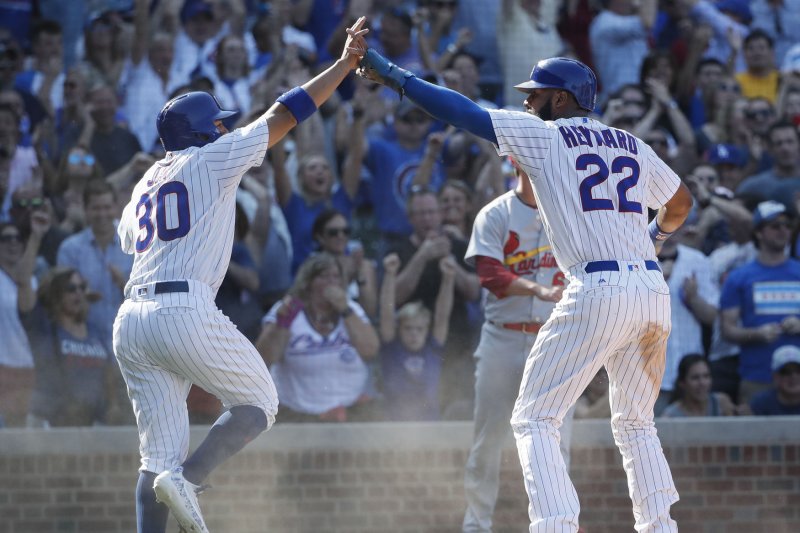 Chicago Cubs Jason Heyward (22) celebrates with Jon Jay (30) after scoring against the St. Louis Cardinals in the sixth inning at Wrigley Field on September 15, 2017 in Chicago. Photo by Kamil Krzaczynski/UPI | License Photo

CHICAGO -- The Chicago Cubs stayed on a roll and improved their playoff picture. But not before a last-minute scare.

With the tying run on first base, the St. Louis Cardinals' Dexter Fowler hit a long drive to center field. Earlier in the day, he had smacked a game-tying, three-run home run.

"I thought it was going off the scoreboard," Cubs closer Wade Davis admitted.

The fly ball ended up staying in the park, and the Cubs held on for a 4-3 victory over the Cardinals to complete a three-game sweep.

"He put a pretty good swing on it. I don't know if the wind helped me out there, but definitely happy it didn't go out," said Davis, who allowed a leadoff single to Tommy Pham before getting a popup, a lineout and the flyout to notch his 31st save in as many chances.

Jason Heyward hit a go-ahead single with two outs in the seventh and finished with three hits for the Cubs (83-66), who have won six straight and climbed 17 games above .500. They also moved to six games ahead of third-place St. Louis (77-72) and four games ahead of second-place Milwaukee in the National League Central.

Pedro Strop (5-4) earned the victory after throwing a scoreless inning. Tyler Lyons (4-1) picked up the loss, allowing a run and

The Cubs improved to 11-4 against St. Louis this season, including 8-1 at Wrigley Field.

The Cardinals left the bases loaded in the eighth when Matt Carpenter struck out against Brian Duensing to end the inning.

"We had our opportunities today to get the big hit," Cardinals manager Mike Matheny said. "Dex almost gave us a second one. The wind took care of that one."

Fowler's three-run home run, his 16th of the season, tied the game 3-3 in the sixth inning. Yadier Molina followed with a double and Kolten Wong was hit by a pitch to prompt Cubs starter Jose Quintana's exit.

Quintana gave up three runs and six hits, struck out eight and walked one in 5 2/3 innings to fall short of his fourth consecutive

quality start. He was 3-0 with a 2.60 ERA in three previous starts against St. Louis.

Ben Zobrist's grounder gave the Cubs a 1-0 lead in the third inning. Chicago loaded the bases before Alex Avila struck out to end

St. Louis loaded the bases with two singles and an error in the fourth inning but went scoreless when Molina grounded into an

Schwarber hit a solo shot in the bottom of the fourth. After Addison Russell and Quintana drew back-to-back walks, Zobrist hit an

RBI single to extend the lead to 3-0.

The Cardinals entered the series winning five of their last six.

"We got big hits in the last series," Matheny said. "We had pretty good starting pitching this series, same in the last. We got into situations where we could turn the momentum. It's hard to come by those. Our guys want that."

NOTES: Cubs C Willson Contreras served his one-game suspension Sunday against the Cardinals. His suspension was reduced to one game. He was originally suspended two games and fined due to throwing his mask and disputing a call by home plate umpire Jordan Baker on Friday. RHP John Lackey also was fined for arguing the call. ... Cubs SS Addison Russell (right foot strain and plantar fasciitis) started at shortstop one day after he returned from the disabled list and hit a pinch-hit home run against St. Louis. ... Cardinals RHP Adam Wainwright (right elbow impingement) threw a bullpen session Sunday. He is expected to make his next appearance out of the bullpen. ... Cardinals 2B Kolten Wong (lower back tightness) returned to the starting lineup. He sat out Saturday's game. ... St. Louis CF Dexter Fowler also was in the lineup after getting hit with a pitch on his hand Saturday. ... Cardinals 1B Jose Martinez extended his career-high on-base streak to 18 games with a single.