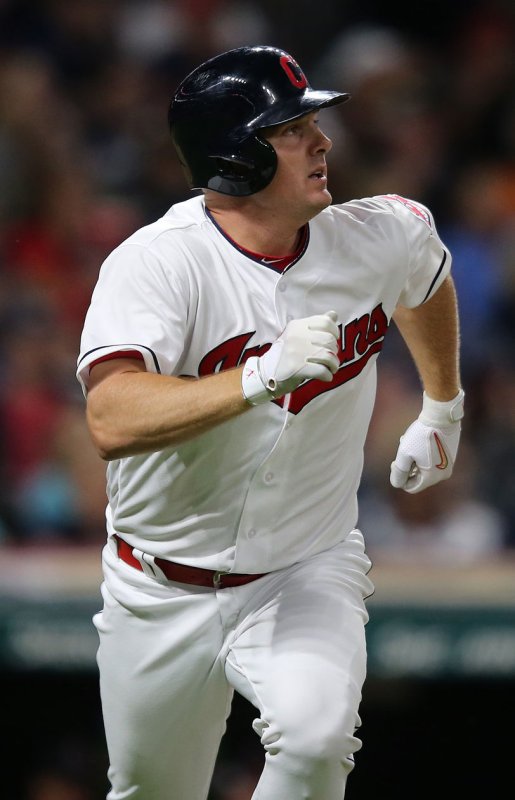 Jay Bruce lifted the Cleveland Indians to their 22nd consecutive victory, courtesy of a 3-2 comeback victory over the Kansas City Royals on Thursday. Photo by Aaron Josefczyk/UPI | License Photo

CLEVELAND -- Jay Bruce's RBI double in the bottom of the 10th inning gave the Cleveland Indians a 3-2 victory over the Kansas City Royals, extending the Indians' American League-record winning streak to 22 games.

It is the second-longest winning streak in major league history, trailing only the 26-game run by the 1916 New York Giants. The 1935 Chicago Cubs and the 1880 Chicago White Stockings had 21-game runs.

It was the first walk-off win by the Indians during their streak, in which they have outscored their opponents 142-37.

After Cleveland tied it at 2-2 in the bottom of the ninth with a two-out, two-strike RBI double by Francisco Lindor, Jose Ramirez led off the bottom of the 10th with a hustle double to center field off Brandon Maurer (2-2). It was Ramirez's fourth hit of the game.

Edwin Encarnacion drew a walk before Bruce hit a line drive down the right field line for a double.

With the Indians trailing 2-1 and one out in the bottom of the ninth, Tyler Naquin, pinch-hitting for Brandon Guyer, singled off Royals closer Kelvin Herrera. Francisco Mejia, pinch-hitting for Yan Gomes, grounded into a forceout at second and was replaced by pinch runner Erik Gonzalez.

Lindor then doubled off the left field wall, scoring Gonzalez with the tying run. It was Herrera's fifth blown save of the season.

In the sixth inning, with the score tied 1-1 and Royals right fielder Melky Cabrera on first, Eric Hosmer hit a fly ball down the left field line. Abraham Almonte, after a long run, attempted a sliding catch but missed. The ball bounced away for a double, scoring Cabrera.

Cleveland missed a chance to score in the bottom of the sixth. With one out, Ramirez walked and attempted a steal of second. Ramirez slid head-first and his hand reached the bag before the tag by second baseman Whit Merrifield. But Merrifield kept the tag on Ramirez, whose hand came off the bag, and the runner was called out.

Cleveland challenged the call, but after a video review, the ruling was upheld. It became a big call, because Encarnacion then singled, and Bruce drew a walk. However, Santana grounded out to third to end the inning.

Indians reliever Andrew Miller entered the game in the seventh inning, his first appearance since Aug. 21. He had been on the disabled list with tendinitis in his right knee. Miller gave up two singles but struck out a batter, and he got Alex Gordon to hit into an inning-ending double play.

After Tomlin retired the side in order in the first inning, the Royals took a 1-0 lead in the second. Hosmer led off with a walk, and he went to third on a single by Salvador Perez.

Mike Moustakas' groundball to second baseman Ramirez was turned into a double play, but Hosmer scored on the play to give Kansas City a 1-0 lead.

The Indians tied it with a run in the third inning. Almonte led off with a double to right field. Kansas City starter Jake Junis retired the next two batters, but Lonnie Chisenhall lined a single to right to drive in Almonte with the tying run.

The Royals threatened to score in the fifth, when Perez led off with a single, boosting his career average versus Tomlin to .500 (20-for-40). Tomlin struck out Moustakas, but a single by Brandon Moss put runners at first and third with one out.

But Tomlin struck out Alcides Escobar and Gordon to end the inning.

NOTES: The Indians activated LHP Andrew Miller off the disabled list. Miller had been on the DL twice since Aug. 2 with tendinitis in his right knee. ... Indians 2B Jason Kipnis (hamstring) is expected to be activated off the disabled list on Sunday. ... Indians LF Lonnie Chisenhall was removed from the game in the sixth inning with tightness in his right calf. ... Royals LHP Danny Duffy (left elbow impingement) is expected to be activated off the disabled list to start the Sunday game against the Indians. ... Royals 3B Mike Moustakas' next home run would be his 37th, which would be a Royals record, breaking the mark set by Steve Balboni in 1985. Moustakas, who has been bothered by sore knee, has one home run in his past 24 games.