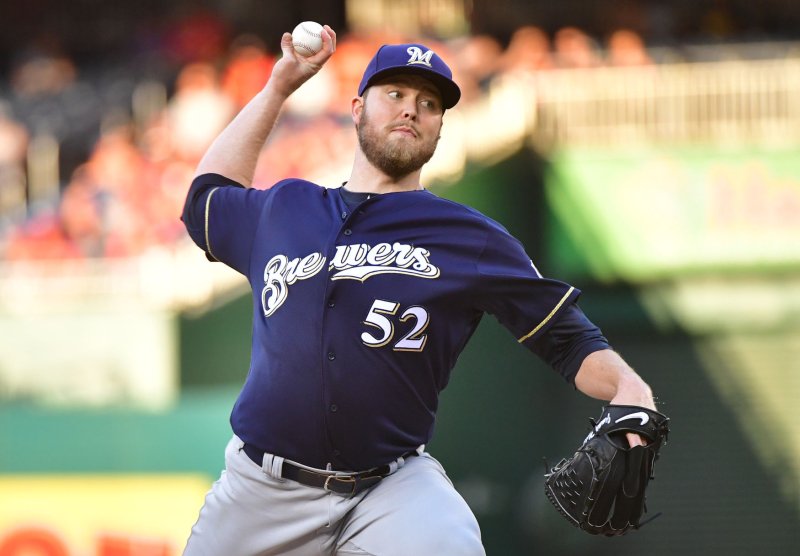 Milwaukee Brewers pitcher Jimmy Nelson throws from the mound in a game against the Washington Nationals in July. Photo by Kevin Dietsch/UPI | License Photo

It sure looked like a good day for the Milwaukee Brewers, even though it really wasn't.

Milwaukee crushed the Cubs 15-2 Saturday at Wrigley Field to winnow Chicago's lead over the Brewers in the National League Central to three games and Milwaukee's deficit to Colorado for the second wild card to 2 1/2 games. Milwaukee also lost ace right-hander Jimmy Nelson for the rest of the season when an MRI exam showed a partially torn labrum and a rotator cuff strain in his shoulder.

The loss of Nelson could doom one of the season's best stories: the Brewers' unexpected drive for their first postseason berth since 2011. See, back in April the only chance the Brewers were given to finish out of the division cellar was if the Cincinnati Reds proved worse. But talents like Nelson emerged a year ahead of schedule.

Nelson is 12-6 with a 3.29 ERA, but he didn't get hurt fulfilling his primary objective: throwing a ball. He hit a long single in the fifth inning of Friday's significant 2-0 win over the Cubs and suffered the injury diving headfirst back to first to beat a throw.

And with that, it is high time that the National League adopt the designated hitter already.

How many more times must we see a team's season redirected when a pitcher suffers an injury at the plate or on the bases? It happens just about every season and sometimes more than once.

Last season, Red Sox right-hander Steven Wright also hurt his shoulder diving back to a base. An All-Star and 13-5 with a 3.01 ERA to that point, Wright did not win another game for Boston, and the Sox lost in the American League Division Series. The year before that, Cardinals ace Adam Wainwright popped his Achillies tendon breaking out of the batter's box and was lost for the season. St. Louis lost in the NLDS.

The list of pitchers who have gotten hurt with a bat in their hands or on the bases is a long one. One of note was when Yankees righty Chien-Ming Wang injured his foot on the bases and missed 15 starts in a 2008 season where he went 8-2 as New York missed the postseason by six games. Another was when Randy Johnson tore his rotator cuff on a swing in 2009 with San Francisco -- he never started another game.

Nelson is the third Brewer this season to suffer such and injury and miss time. Junior Guerra strained a calf running to first base and Chase Anderson strained an oblique on a swing.

When Boston's Wright got injured in 2016, it was in a game between two AL teams, but the point remains about the dangers in having pitchers doing what they don't usually do.

It's possible that people would miss the nostalgia and charm of the strategy that comes with pitchers hitting, the double switches and forced exits for pinch hitters. But adopting the DH is the right thing to do.

It's a wonder it didn't happen in 2013 when the Houston Astros were moved to the AL to make it 15 teams in each league because things would be fair. It's even more bewildering it didn't happen the past offseason in collective bargaining.

An AL active roster often has a full-time DH like Cleveland's Edwin Encarnacion whereas an NL active roster might have a player who wouldn't be there if he didn't play many positions like Washington's Wilmer Difo. So with interleague games now played all season, an AL wild-card contender could face a key game with a weakened lineup in an NL park.

Worse still, it mars the sport's signature event: the World Series. In the NL park, the AL teams have to sit down a member of their regular lineup and play at less than full strength. In the AL park, pitchers can go deeper in games without fear of their spot coming up in the batting order. In other words, with the DH, the best brand of baseball would be played in each series game.

Adding the DH has appeal because it means more offense for a game that wants to be livelier and appeal to a younger demographic. And where owners might not want to see more high-paying jobs on their rosters, it would be more than offset by greater fan interest.

It's also worth noting here that the use of a designated hitter is pervasive throughout the minor leagues, in college baseball and in almost every international league. Pitchers that reach the major league level often have not hit or run the bases regularly since high school.

But in the wake of this injury to Nelson and the damage it may do to the Brewers' playoff chances, there is one grisly reality. Pitching in baseball's most precious commodity and teams should want to protect that.

For that reason, the NL needs a DH.