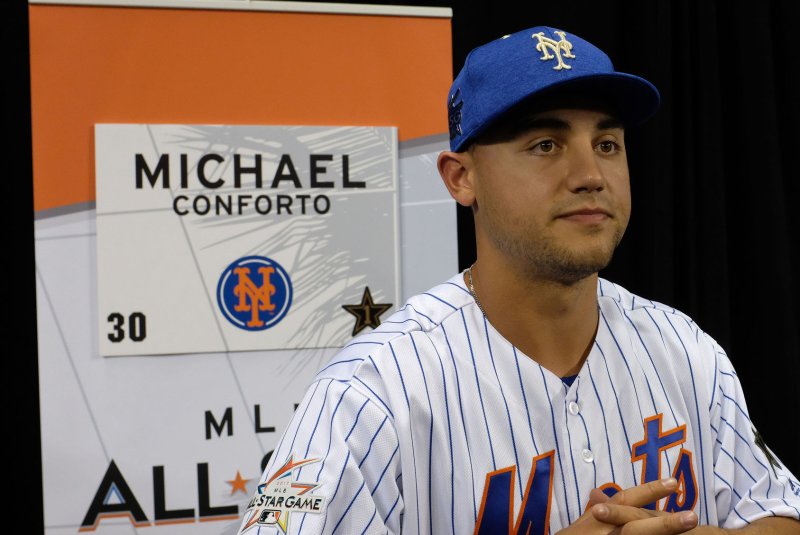 New York Mets outfielder Michael Conforto talks to the media during Q&A before the start of the 2017 MLB home run derby on July 10 at Marlins Park in Miami. File photo by Gary I Rothstein/UPI | License Photo

Aug. 25 (UPI) -- Outfielder Michael Conforto dislocated his shoulder while swinging his bat in the New York Mets' 3-2 loss Thursday to the Arizona Diamondbacks.

Conforto, 24, was 0-for-2 in the contest before he stepped in to face Diamondbacks lefty Robbie Ray in the sixth inning. He worked the count up to 2-0. Ray then tossed in a third offering to Conforto. The right fielder hacked at the pitch, but only found air. He held up after the swing and lowered his shoulder in pain.

Mets trainers and manager Terry Collins ran out to Conforto before he was walked into the dugout. Conforto has been one of the Mets' only stars this season. The All-Star outfielder is hitting .279 with 27 home runs and 68 RBI.

"It turns your stomach," Collins said after the game, according to MLB.com.

"Young player who's having a tremendous year, really making a name for himself, to go down with an injury like that, it's tough to watch."

The Mets (55-71) have lost four of their last five games. New York battles the Washington Nationals at 7:05 p.m. Friday at Nationals Park in Washington, D.C.

"Quiet. A lot of sadness. Frustration," Mets infielder Dominic Smith said of the atmosphere in the dugout after Conforto's injury, according to the New York Post. "It just kind of makes you feel depressed. It just [stinks] to see another player go down."

Conforto was hitting .247 in August after raking for a .301 average in July for the Mets.