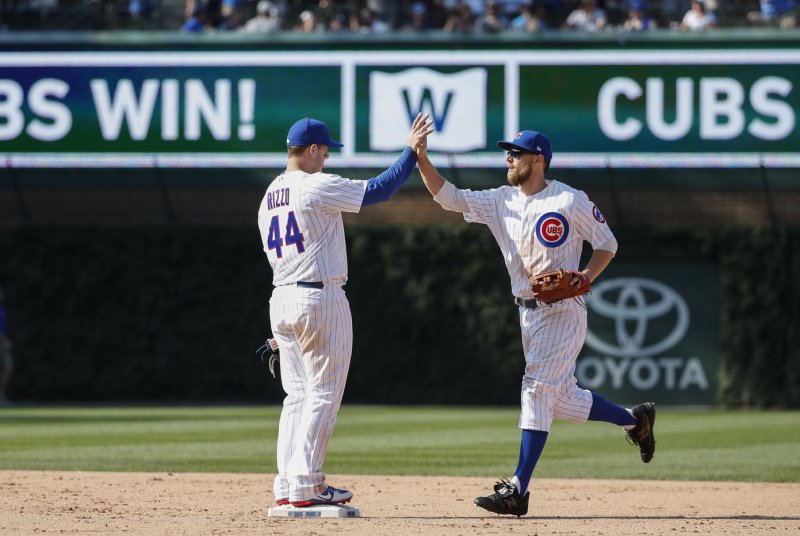 CINCINNATI -- It was the stuff of nightmares for Ben Zobrist, but ultimately the Chicago Cubs produced a dreamy result on Tuesday night.

Zobrist drove in the go-ahead runs with a pinch-hit, two-run double in the seventh inning as the Cubs rallied for a 13-9 victory over the Cincinnati Reds in the opener of a three-game series at Great American Ball Park.

"It was a relief," said Zobrist, when asked to describe his emotions while standing on second base. "We won, and I was able to contribute something."

Zobrist arrived at Great American Ball Park about an hour before the game, around three hours later than usual.

He spent more than an hour haggling with a rental car company, then fought heavy traffic en route to Cincinnati from his hometown of Nashville, where he spent the off day on Monday.

"I was frustrated for about seven hours today," he said. "I'm just glad I made it."

When it became apparent Zobrist wasn't going to make it to the ballpark on time, Cubs manager Joe Maddon put Ian Happ into the lineup at second base, batting fifth.

In 2008, Johnson got to the ballpark late due to a delayed flight from the minors then hit a game-tying home run for Maddon's Tampa Bay Rays off the Boston Red Sox's Jonathan Papelbon.

"I've had nightmares about showing up at the ballpark late," Zobrist said. "It won't happen again. (Maddon) said I'm going to be Dan Johnson, I'm going to do something special. I'm glad it worked out."

Zobrist's double and his RBI groundout in the eighth helped the Cubs (67-57) score 13 runs in a four-inning span to move 10 games above .500 for the first time this season.

Javier Baez (2-for-5) also delivered a two-run single in the seventh.

"He can have some really wild at-bats, but he likes the moment, and he came through again," said Maddon.

Hector Rondon (4-1) retired one batter for the win. Wandy Peralta (3-4) allowed three runs in two-thirds of an inning for the loss.

Eugenio Suarez homered twice and had a career-high five RBIs, and Jesse Winker and Scooter Gennett each hit solo homers for Cincinnati (53-73).

Winker's long ball off Felix Pena was the first pinch-hit homer of his career.

Reds starter Homer Bailey left after three scoreless innings for precautionary reasons with irritation in the back of his right shoulder.

Bailey, who came off the disabled list June 24 after missing most of the past two seasons with elbow and forearm surgeries, was visited by trainers after walking John Lackey in the third inning but remained in the game.

Bailey did not return for the fourth, however, exiting after 47 pitches. He allowed only one hit and one walk while striking out two.

"We debated about whether he could go back out there, but we knew he shouldn't with the road he's traveled," Reds manager Bryan Price said. "We don't have any intention to put him on the DL at this point."

Reds center fielder Billy Hamilton starred at the plate and in the field. He led off the game with a single, stole his 52nd base of the season, and later scored from third on a wild pitch to put Cincinnati ahead 1-0.

Tucker Barnhart drove home Suarez with a double into the right field corner in the second. Gennett's 22nd home run of the season and third in his past eight games made it 3-0.

The Cubs loaded the bases in the fifth against Kevin Shackelford, who took over for Bailey, and scratched across a couple runs before Heyward's two-out RBI single tied the score 3-3. Shackelford allowed three runs, three hits and four walks in 1 2/3 innings.

Suarez's three-run shot, his 22nd home run of the season, handed a three-run lead back to Cincinnati in the fifth.

However, the Reds' bullpen later relinquished the lead, and then some. Cincinnati right-hander Blake Wood allowed five runs in one inning.

"It's hard to watch, especially since we've seen better from him," said Price.

NOTES: In the ninth inning, 1B Anthony Rizzo became the third left-handed position player to play third base for the Cubs, the first since George Decker in 1895. ... Cubs 3B Kris Bryant was hit on the left hand in the ninth inning by Reds RHP Blake Wood. X-rays were negative. ... Reds RHP Scott Feldman, who is on the disabled list for the second time this season due to right knee inflammation, underwent season-ending arthroscopic surgery. ... Cincinnati SS Zack Cozart returned to the lineup after missing two games, and he went 1-for-4. He was hit on the left leg by a pitch on Friday.